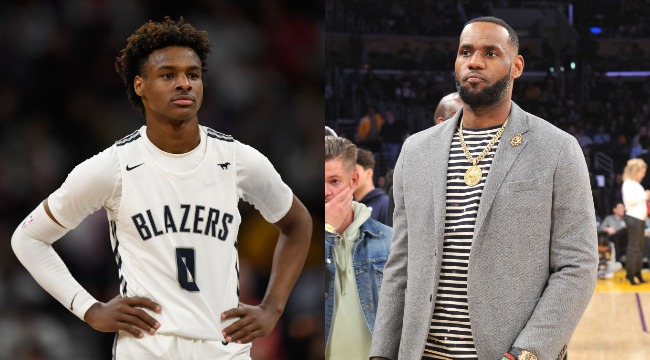 The biggest fear of any high schooler, outside of having a bad acne day on prom night, is to bear witness to one’s parents inserting themselves into their lives on a public stage.

I’m not sure if that blow if softened if your father is one of top three basketball players to ever live, but I can’t imagine a 16-year-old Bronny was giddy to see his father hijack the spotlight late in a 5-point game.

Ironically, the impetus for LeBron dressing down an AAU announcer over the weekend was to scold him for bringing Daddio into the mix in the first place. After Bronny was awarded a foul call, the PA announcer reportedly claimed that Bronny was going to get those calls in the gym of his dad’s alma mater, St. Vincent St. Mary’s.

The gym rebranded to The LeBron James Arena in 2013 after LeBron donated $1 million to renovate the gym and gifted every STVM team with brand new Nike uniforms. The renovation includes a “dedication wall” to LeBron’s early 2000s high school team, who won three championships in four years.

Still, this is about Bronny.

Lebron James makes it known that he wants this moment to be about Bronny James not himself.

He addressed a PA announcer who claims Bronny James is going to get those calls in his father’s gym(St. Vincent St. Mary's). pic.twitter.com/qSML052ah8

For those who believe LeBron is a narcissistic helicopter parent drunk off two decades of universal adoration, this provided another bullet in the chamber.

Others argued that the PA announcer deserved to be checked for failing to stay neutral and bringing LeBron into it in the first place.

PA announcer says Bronny got a favorable call because of his dad, LeBron confronts him

"I thought it was a cheap shot by the announcer to frame it like this. LeBron was well within his right to step in and say that was unnecessary." — @ShannonSharpe pic.twitter.com/TV5ybzKmu2

My dad didn’t make it to my senior playoff game because he had to “work.” The game was at 7 pm. He works construction.