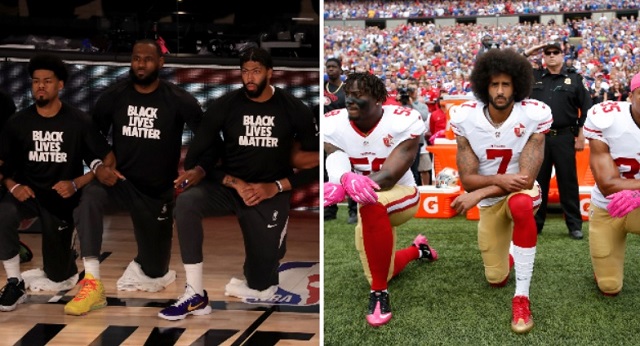 The NBA returned last night after a 4-month hiatus after being forced to sit out during the Coronavirus pandemic and players held a demonstration before the game to show support for the Black Lives Matter movement.

During the national anthem, every member of the Lakers and the Clippers teams interlocked arms and knelt in a unified show of solidarity to raise awareness for social justice.

United for a greater cause. #BlackLivesMatter pic.twitter.com/dthLmon0a7

After the game, LeBron spoke to the media and talked about Colin Kaepernick’s influence on the social justice movement in the NBA. LeBron went on to thank Kaepernick for everything he’s done for the black community and said he had hoped he made Kaep proud with his actions on Thursday night.

I hope we made Kaep’ proud,” . “I hope we continue to make Kaep’ proud. Every single day, I hope I make him proud in how I live my life, not only on the basketball floor, but off the floor.”

You go back and look at any of his postgame interviews when he talked about why he was kneeling, it had absolutely nothing to do about the flag, had absolutely nothing to do about the soldiers, the men and women that keep our land free,” “He explained that and the ears were uncomfortable. People never listened. They refused to listen. And I did. And a lot of my people in the Black community did listen. And we just thank him for sacrificing everything that he did to put us in a [situation where] today, even years later, to be able to have that moment like we did tonight.”