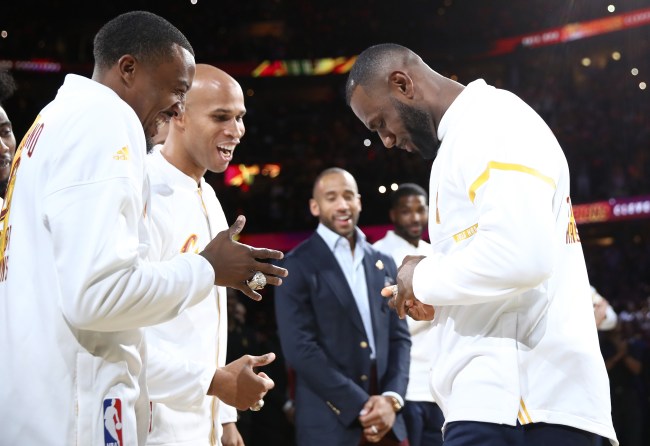 LeBron James and his Los Angeles Lakers are all but done this season. Or so that’s what everyone’s been talking about following a miserable six-week stretch that has seen the team go just 5-13 since January 19th, which is the third worst record in the NBA during that time, trailing only the lottery-bound New York Knicks and Phoenix Suns. For a team with championship aspirations after adding James in free-agency this past offseason — no matter how farfetched those were — that’s not really the company one wants to be mentioned with.

Still just an absolute mind-boggling stat for a team with LeBron James on it. pic.twitter.com/jz2lIaUSg0

As much as everyone’s writing off the Lakers, suggesting LeBron James should shut it down the rest of the season and prepare himself for next year, and are laughing at the dysfunction that’s going on with the entire organization, there are a few people out there who are quick to remind people that LeBron James is still LeBron James — and that should be enough to quiet any doubters. The people saying such absurd things? Some of James’ former teammates on the Cleveland Cavaliers, and, more specifically, members of the 2016 championship team that overcame a 3-1 NBA Finals deficit to beat the Golden State Warriors.

Forget the fact that Basketball Reference has the Los Angeles Lakers’ playoff odds at an embarrassing 0.1 percent, because guys like Channing Frye, Richard Jefferson and Kevin Love know that it’s never smart betting against LeBron James, with Love simply telling Bleacher Report, “we’ve seen in the past anything can happen,” likely referring to the 2016 NBA Finals outcome.

In a detailed piece on Bleacher Report, the three former teammates of James spoke about why they aren’t quite ready to count the Lakers out of reaching the postseason this year. As absurd as that might be to even think about given the sad state of the franchise, Frye talked about why it’s still a possibility.

“I don’t care if there was one game left and LeBron had to win two,” Frye told Bleacher Report. “I’d still wait until the last second to doubt him.”

“Listen, no one gave us an effing inkling when we were down 3-1 or when we were fourth in the East,” Frye said, referring to the 2016 NBA Finals and the Cavs’ regular-season finish a year ago. “Then something happens when it’s crunch time, and [LeBron] just steps to another level. I’m not doubting him or that team.”

Sure, Frye has a point in suggesting he saw the legend of LeBron James firsthand during the Cavs’ championship season, but that was three years ago, with a motivated James knowing his goal was to win a title for his home state, alongside fellow All-Stars Kyrie Irving and Kevin Love. This Lakers team doesn’t have talent like that to support James, so it’s hard to take Frye’s belief legitimately.

But, as mentioned, Channing Frye isn’t the only one showing support for LeBron James, admiring his talent and going off of some of his previous accomplishments as reason to believe the Lakers can still reach the playoffs. Richard Jefferson also added this, per the B/R article, via the Bucher & Friends podcast

“Do I still think that LeBron James is the best player in the world? Yes. Is the guy injured? Yes. Has the guy played a lot of basketball? Yes. Could it be Father Time? Yes, but I still believe that if you were to put him in a seven-game series with the same amount of talent as any other player, I still believe that he comes out victorious. That’s just me because, honestly, I haven’t seen anything different in the last 13 years,” Jefferson said on the Bucher & Friends podcast.

“We’ve all marveled at his ability to defy Father Time, very similar to a Tom Brady. When I look at this situation, I don’t think we’re seeing the end of LeBron James.”

Although LeBron James’ former teammates are supportive in the three-time NBA champ’s abilities, it’s hard to imagine a scenario where the Los Angeles Lakers get hot, get lots of help from the teams in front of them and reach the playoffs. But James has done some phenomenal things in his career, it’s hard to doubt him pulling off the unbelievable again until he’s literally out of options.