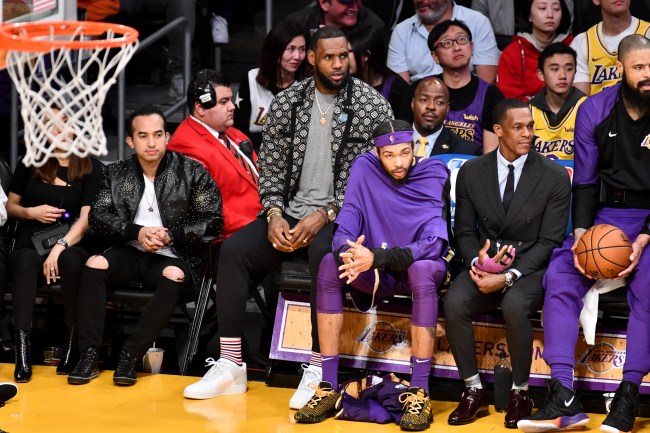 LeBron James might be averaging a triple-double since returning from a groin injury that cost him 17 games, but there’s a growing belief from a few people that the self-proclaimed GOAT is doing more harm than good on a young Los Angeles Lakers team. From one exec saying James “killed” the team’s chemistry due to his public trade requests, to LeBron passively aggressively attacking his teammates following a bad loss to the Memphis Grizzlies the other night — which dropped the team to the No. 11 spot in the Western Conference — things have been rocky AF in “The King’s” first season in LaLa Land.

Given all the drama and inconsistency with the Lakers, if it seems like it’s a lost season, it probably is. Sure, the team got off to a quick start and found themselves in the No. 4 spot in the Western Conference prior to LeBron James’ injury on Christmas Day, but, since then, they’ve looked like the lottery-bound team of the past few years — and things don’t look like they’re getting any better. Considering that, former Boston Celtics great and current ESPN analyst Paul Pierce has some sage advice for the Lakers — wave the white flag, shut down LeBron James, regroup and plan for next season.

That was the message Pierce delivered on yesterday’s The Jump on ESPN, where he offered some support as to why he thinks his opinion should be taken seriously by the Lakers. Take a look below at what he had to say.

To paraphrase Paul Pierce, here’s a quick excerpt, per UPROXX:

“If I were the Lakers, I would shut LeBron down,” Paul Pierce said to the surprise of Rachel Nichols. “No, seriously. He’s getting older, he has to do too much for them to win. Just look at … he puts out a triple-double, and they can’t win. Just imagine if he really goes out and really exerts himself and has to go for 40…”

Nichols then asked Pierce if he’d give up on the year now, to which he said he would, because this season was “a wash” and that they weren’t expected to contend right away, even though Nichols and Tracy McGrady pointed out they were in fourth place in the West before James went down.

One of LeBron James’ all-time great rivals when he was still in his prime, Paul Pierce knows when things just don’t look right with the guy. While James has dropped great individual numbers to help put his team in position to win, the fact that the Lakers are a paltry 3-6 since his return is something that should concern the team’s coaches and execs. Do they really think they have a legit shot at winning a title this season? Probably not, so why not save LeBron for the next three years?

Sure, Paul Pierce may just be trying to stir up controversy here as a talking head on TV now, but the dude has a point, so the Lakers would be wise to at least consider sitting LeBron James the rest of the year to get him healthy. Doubt that happens, but it may be doing more harm than good in the long-term if they don’t.