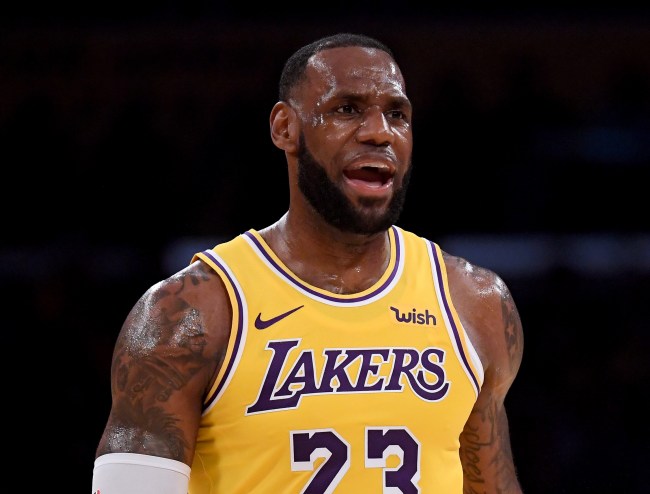 LeBron James and his Los Angeles Lakers teammates aren’t exactly having a great 2019 so far. While James has been averaging a triple-double since returning from an injury he suffered on Christmas Day, his Lakers have sucked with him on the floor just as bad as they did without him, having fallen to the No. 11 spot in the Western Conference, making them legitimately in danger of missing out on the NBA Playoffs.

In fact, things are so rough that, after the Lakers’ most recent loss on the road against the Memphis Grizzlies, fans weren’t just ripping LeBron James, but some even went as far as burning his purple and gold jersey, basically turing their back on him and the team. That’s some pretty petty sh*t, but, hey, when you’ve got the self-described GOAT, people expect more.

While the fans’ mutiny on the team is one thing, LeBron James is dealing with another public coincidence that just looks bad. That’s because the giant Nike banner that was hanging on the side of the Lakers’ home arena, the Staples Center, was removed today, a day after the bad loss to the Grizzlies. Take a look below.

OK, so the damn thing may have been scheduled to be removed no matter how the Lakers were performing, but it just looks bad; especially for LeBron James, who hasn’t exactly been accepted by the fans of the historic franchise since he joined this past summer. James is quickly coming to the reality that he’s no longer near his hometown of Akron, Oh., playing for the Cleveland Cavs with fans who adored him after his 2014 return, then wished him luck and gave him a tribute video after leaving for the Lakers. In other words, LeBron ain’t in Kansas anymore.

While this Nike banner being taken down isn’t nearly as iconic as the one that occurred in Cleveland across from the Cavs arena — and, who knows, this one could be replaced by an updated photo of LeBron James — it’s hard to ignore the humor in it given how crappy the Lakers have played all season long.