The LeBron Banner In Cleveland Has Been Replaced And, F*ck, Is It Awful 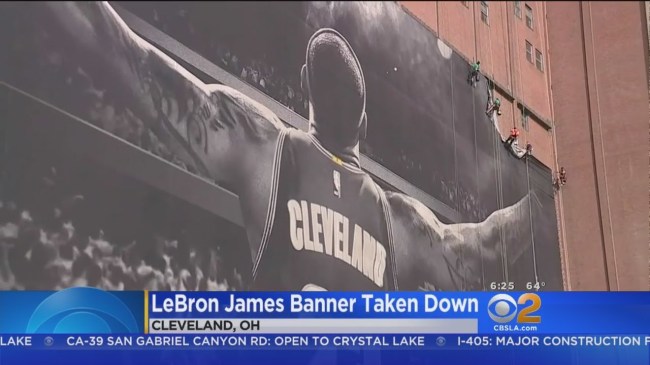 I was born and raised near Cleveland, with my high school even playing basketball against LeBron James’ St. Vincent-St.Mary’s team during the exact same years that the future Hall of Famer was there. So, when it comes to Cleveland sports, I’ve got a little bit more invested than the average Joe.

Like you have with your sports teams and favorite players, I’ve cried tears of both sorrow and joy over the years. But when LeBron left us a few months ago for the bright lights of Hollywood to join the L.A. Lakers, I wished him luck and couldn’t have been more grateful for the best damn years of my life as a Cleveland sports fan. After all, he gave us a title, so what else could we want, right?

For good reason, LeBron James was (and still is) an absolute icon in the city of Cleveland. Hell, that’s why he had that giant banner that was across the street from the Cavs’ home arena, Quicken Loans Arena. As the most photographed spot in the city over the past few years since James returned to the team in 2014, sadly, it had to come down when he bolted town for the second time. And, while there were some interesting suggestions for what it should be replaced with — my personal favorite being the Baker Mayfield idea following his comeback win over the Jets a few weeks back — the team finally decided what’s going up there now.

And, my goodness, it’s f*cking miserable. Like, beyond awful. Here’s a look at what the Cavs tweeted out would be up on that wall.

I’m not sure it gets anymore generic than that. I guess it really is true, Cleveland gonna Cleveland. This is right on par with the time the Browns said they changed the color orange on their uniforms, which promptly got them roasted by the Internet. **INSERT SAD FACE EMOJI**

As you might imagine, because it’s Cleveland and people love shitting all over us, the Internet had plenty of reactions to the LeBron James banner replacement. And, yep, the people on social media have spoken — Cleveland messed this thing up, as usual.

That new banner that replaced Lebron is terrible.

Should have had Frankie , Baker and Sexton on a banner ….New Cleveland ….

The new cleveland banner is a hard no from me pic.twitter.com/6y5RmM2zAB

So not impressed, what is wrong with people in this city. Cleveland’s replacement for the LeBron banner is worse than the mockup https://t.co/Gwcqo75kCp

So. Cleveland put a new banner on the Sherwin Williams building…

Issa seven thousand foot picture of those creepy ass guardians of transportation. WHY?!

Am I the only one that thinks the new banner in Cleveland is ugly?

Replacing the banner that was there is hard, but not making it anything athlete related in place of LeBron is a big wif by everyone involved.

As a native Clevelander, can’t we do better? If LeBron James, the biggest athlete on the planet, can’t save us from being the butt of jokes, who can? Honestly, what the hell is it going to take for us to stop being, well, so damn Cleveland?