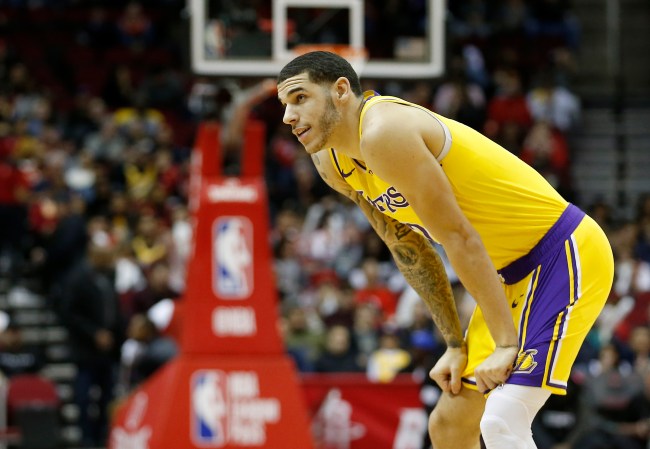 Lonzo Ball was just a pimply-faced 16-year-old kid back in 2013, but Twitter uncovered an old tweet he sent out about the Los Angeles Lakers missing out on the playoffs back then and, oh yeah, people are roasting the hell out of him about the message. Such is the sad state of the Lakers right now, guys.

With Lonzo’s Lakers now 5.5 games back of the final playoff spot in the Western Conference, it seems as if the season will, once again, end with a lottery ball and not a postseason berth. And, while Lonzo Ball is injured right now and can’t help his teammates make one final push to try and reach the NBA playoffs, that hasn’t stopped Twitter from laying into him over the 2013 tweet.

Here’s a look at a screenshot of what Ball posted nearly six years ago, via FTW.USAToday.

And, because Twitter is savage as all hell, here’s a look at some of the replies people are sending out today, given the Lakers have self-destructed and don’t appear to be showing signs of improvement anytime soon to reach this year’s playoffs.

This not a prediction, its a spoiler https://t.co/Gpw8NT7m8P

Spoke it to existence…. #LakeShow https://t.co/THFKyS6ntu

How is this tweet gonna be true for six straight seasons? https://t.co/JyhYWQsN5P

You're in a Laker uniform now, cuz. https://t.co/41eCHLcOom

The Prophecy has came true! 🙏

U right about that chief https://t.co/erfHEP6IyH

Twitter never forgets, guys, so this is why it’s always smart to really think long and hard before hitting that “Send” button on social media — especially if you have ambitions of becoming famous, as Lonzo Ball probably did back in 2013. Oh, well, you live and you learn, right?

With the Lakers a pathetic 5-13 since January 19 — which is the third worst record in the NBA behind the lottery-bound New York Knicks and Phoenix Suns — everyone’s laying it on them as they struggle this year. That’s what happens when a franchise goes out and signs the world’s best basketball player, surrounds him with a makeshift roster and young players, and then falls flat on their face because expectations were way too high for an unproven team. Social media shows no mercy, and the replies to Lonzo Ball’s 2013 tweet is just the latest example.