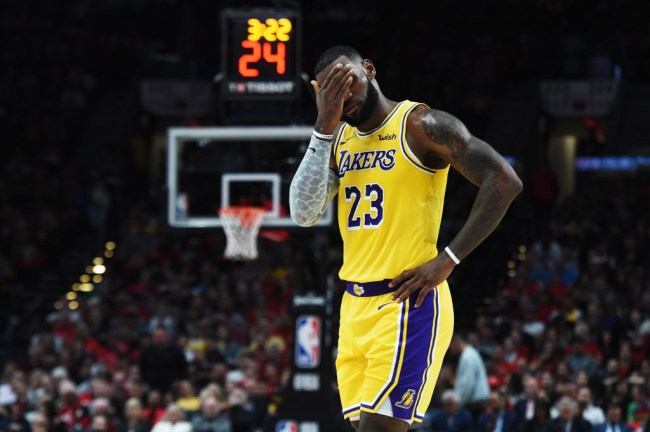 The Los Angeles Lakers haven’t appeared in the playoffs since 2013 but came into this season with clear eyes and full hearts hoping they might be able to rectify that situation after signing LeBron James following far too many months of speculation concerning where the superstar will likely play out the rest of his career.

Unfortunately, all is not well in the City of Angels. The Lakers are currently sporting a 30-33 record and saw their odds of making the playoffs crash to season-low levels after losing to the even-more-hapless Suns on Saturday night.

Last week, LeBron caught a fair amount of heat after a video made the rounds that showed he gave approximately zero shits about playing defense while facing off against the Grizzlies.

My God. This is art.
pic.twitter.com/mx2xkz3Fdk

On Friday, he also got crushed by the internet when he walked off the court before the final buzzer even sounded because he’s apparently straight out of fucks to give.

It’s not exactly shocking that Lakers fans are pissed off by how poorly the team is performing, but based on a video he posted, no one is more fed up than Snoop Dogg, who did not hold back following the loss to the Suns.

Snoop Dogg has had enough with this Lakers team pic.twitter.com/v781TuX3EO

In the expletive-filled rant, Snoop—who also had to watch his beloved Steelers self-implode last year—called for the firing of Luke Walton before ripping into the players and coming to terms with the reality that there’s no way the Lakers are going to be able to salvage the season.

However, the real story here is that Snoop is seemingly so fed up with the team that he claims he’s willing to sell the rights to his luxury box at the Staples Center for next for years the fairly reasonable price of $5, saying, “Anybody can have it. All the homies. Blow me up right now.”

I wish you all the best of luck.