Fan Pays Nearly $7,000 For Lakers Courtside Seats To See LeBron James And Giannis Antetokounmpo Play And Both Players Ended Up Sitting Out Game 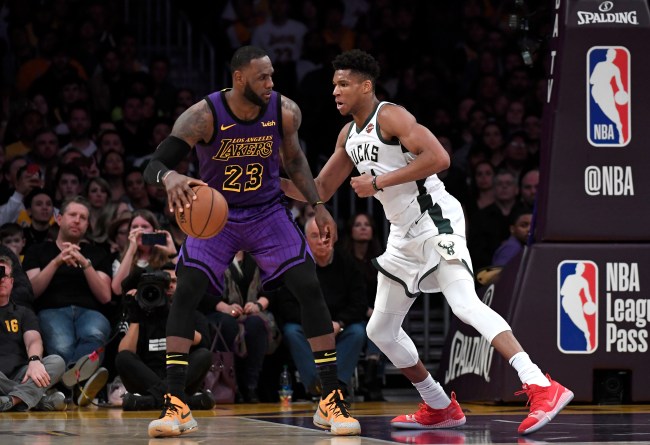 We live in a new era in the NBA where players sit out very often to rest their bodies much to the chagrin of fans who pay big bucks.

This afternoon the Lakers announced that Lakers superstar forward LeBron James was sitting out due to a sore groin.

LeBron James is out tonight with a sore left groin per the Lakers.

The Bucks announced that their star Giannis Antetokounmpo was not playing in tonight’s game because of an ankle sprain.

Giannis will be sitting out tonight due to his ankle sprain.#Bucks pic.twitter.com/sU3XH9JSMA

Many fans were annoyed with the announcement that both stars were sitting out the game.

Lebron and Giannis sitting out tonight. That’s so trash.

Giannis and LeBron sitting out is like Goku and Vegeta. Sitting out the Tournament of power… What’s the point in watching

According to Darren Rovell one fan paid nearly $7,000 for courtside seats to watch both stars tonight before they announced they were sitting out.

$6,970.50: What a fan paid on StubHub, including fees, for two courtside seats tonight for Lakers at Bucks. Both LeBron & Giannis are not playing. 🤷‍♂️