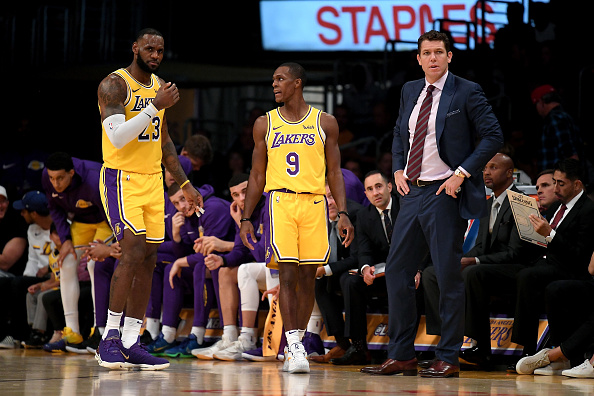 One of the major reasons LeBron James joined the Lakers this offseason was because he was tired of being forced to create plays all the time while he was in Cleveland.

James grumbled to Cavs management about the need to have more playmakers on the roster to ease this burden in recent years. It wasn’t that the Cavs coaches and front office ignored him — it was just that all their data showed they were better when James was the primary playmaker. They were sorry/not sorry about not taking the ball from him.

When James came to the Lakers, he relished the idea of being able to play off the ball more, to use his post-up skills and to generally expend less energy. That was the idea behind signing Rondo, and Lance Stephenson … it would ease the need for James to do as much creating.

Unfortunately old habits die hard for LeBron and as he continues to take control of the play making calls while on the the floor. According to a report from ESPN’s Brian Windhorst, LeBron frequenly ignores coach Luke Walton on the sidelines.

The scouts also have noticed that when James is running the point, he rarely looks toward the bench to receive playcalls from coach Luke Walton. Even when he has seen them, the scouts say, he ignores them and runs the play he prefers. Walton has adjusted, and now when James is running the show, Walton will typically just let him call the game. This probably shouldn’t be considered a slight — it’s just James being James.

While Walton has tried to limit James minutes this season, the aging superstar seems content in putting in a heavy workload.

Walton has done a good job of limiting James’ minutes and using the depth he has in the backcourt to attempt to ease the burden so James can be a bit fresher. He’s averaging a career-low 35 minutes.

Even if it took a bit for Walton to figure out exactly how James was comfortable in the rotation. There was a game in Minnesota early in the season when Walton removed James just five minutes into the game in an effort to set the rotation so James could finish each quarter. James was, to put it mildly, mystified.

Bottom line, things are trending more positively for the Lakers. James getting back into his comfort zone, whether it was in the original game plan or not, is helping.

While Luke Walton is a fine coach, LeBron will never cease to relinquish control as long as he’s still able to produce on the court.