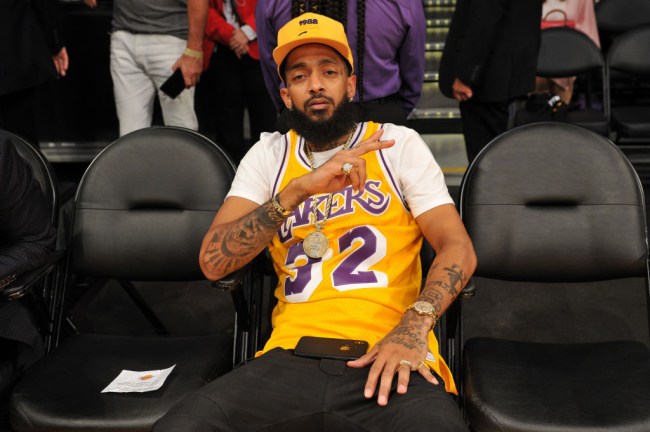 Last weekend, the hip-hop world was rocked to its core when Nipsey Hussle was gunned down outside of his clothing store in Los Angeles while picking up some threads for a friend of his.

While he may have made a name for himself with his music, the rapper was especially beloved thanks to his willingness to give back to the community that helped shape him. He had managed to escape the gang lifestyle and worked to help others do the same, which makes it even more tragic that he fell victim to the senseless violence he was trying to combat.

After the news broke, tributes started to pour in from people in the music industry and beyond. This included a number of athletes who’d befriended Nipsey, like Russell Westbrook, who scored a “double” triple-double earlier this week and dedicated his achievement to the artist.

Russ dedicates his 20-20-20 performance to the late Nipsey Hussle. pic.twitter.com/KbkvwD3z0M

Nipsey was a Lakers fan who was a staple at the Staples Center, and on Thursday night, the team decided to celebrate his legacy with a moment of silence in his memory in addition to playing his music over the loudspeakers during warmups.

Nipsey on the ❤️ pregame pic.twitter.com/Y70pnkEn9v

While LeBron James might not have been on the floor, he was hit hard by the loss and rolled up to the game wearing a shirt emblazoned with the late rapper’s likeness.

"Cause on a mission your worst enemy is idle time…"

However, the celebration of Nipsey’s life wasn’t limited to Los Angeles, as Jimmy Butler also paid his respects with a custom jersey boasting the Hussle name.

Gone but not forgotten.