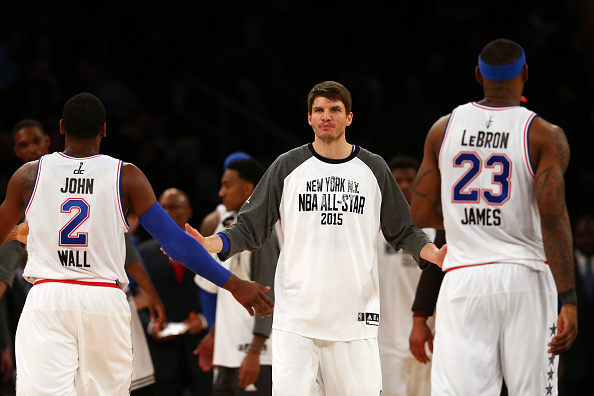 We’re a few months away from the NBA trade deadline but the hot stove is already cooking. Just last week we heard about a scenario that could bring Anthony Davis to the Lakers and now thanks to a report from Kevin Broom of Washington Wizards blog Bullets Forever we’re learning that LeBron’s team might be orchestrating a trade for John Wall.

Broom said that he started to do some digging after he heard rumors online about the Lakers showing interest in Wall.

Broom then spoke to an agent who confirmed that LeBron’s agent Rich Paul was orchestrating the deal.

Source No. 1, a current NBA agent, surprised me by saying the story was true. The source said it’s something Rich Paul — agent to LeBron James and, as of January 2016, John Wall — was orchestrating. But, according to this source, the Wizards were saying no.

A still skeptical Broom spoke to a second agent who also confirmed the rumor.

I was still dubious, so I checked with Source No. 2, another current NBA agent who’s at least as dialed in as Source No. 1. Source No. 2 said the rumor is true. This source said Ball and Caldwell-Pope were definitely in the deal, but that there was still discussion whether the third player would be Ingram, Josh Hart, or Kyle Kuzma. While the boundaries of the deal were defined, details still had to be finalized, and the whole thing could still fall apart.

Broom proceeded to follow up with someone with connections to Rich Paul and he also said that Paul was pushing for a trade for Wall behind the scenes.

So, I went outside the agent network, and asked Source No. 3: someone who works in an unrelated industry but has long-standing connections to Rich Paul and LeBron James. Source No. 3 said Paul was trying to get Wall traded to the Lakers and that the Wizards would do it if Paul could get Magic Johnson and Rob Pelinka on board. But, Source No. 3 warned, it wouldn’t be easy, because the Lakers like their youngsters. Source No. 3 added the nugget that Paul was working on trades to put talent around James because of fears that younger free agents “don’t want to play with LeBron anymore.”

The Lakers are currently playing some good ball but until these rumors are going to continue to swirl until the team pairs LeBron with another star.