LeBron James Is Reportedly ‘So Happy’ In L.A., So Don’t Expect Him To Demand A Damn Thing 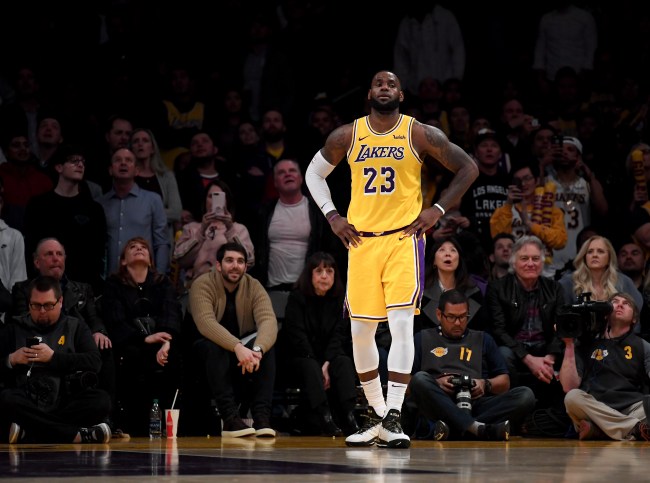 LeBron James might have high expectations for the Los Angeles Lakers, but, apparently, he’s in it for the long haul with the iconic franchise — despite all the dysfunction that has gone on with the team since he arrived via free-agency last summer. While there was internal fighting between the since resigned Magic Johnson and Rob Pelinka, injuries and underperforming from a cast of young players, James is reportedly “so happy” in Los Angeles, so let’s just stop the rumors that he’ll demand a trade.

The report comes from The Athletic’s Joe Vardon, who, since LeBron James’ days in Cleveland, has followed the three-time NBA champ’s career. Appearing on the publication’s Tampering podcast, Vardon had this to say about James’ mindset in Southern California.

“He is so happy to be living in Los Angeles,” The Athletic’s Joe Vardon said on The Athletic’s latest Tampering podcast. “This is where they want to be. LeBron does not want to play anywhere else. I would be shocked if at any point for the remainder of his career, so long as LeBron James Jr. is in high school in Greater Los Angeles, that he would have any interest in playing anywhere else.”

Of course, this shouldn’t be too surprising considering LeBron James signed a four-year deal with the Lakers last offseason, but, still, the entire franchise has been in disarray since he arrived. While the aforementioned drama happened, so too did the Anthony Davis trade rumors — which killed team resolve and trust among LeBron’s teammates — as well as the reports that the Milwaukee Bucks might try and trade for LeBron James; seriously.

At 34 years old and in the twilight of his career, it’d be shocking to see LeBron James do anything drastic and demand a trade or leave in a couple of years for another team — even after he admitted he was pissed about how Johnson left the team. Sure, he’s chasing more titles, but his real business at this point is his production company and business ventures outside of basketball. The city of L.A. offers that more than anywhere else, so expect James to be first in line to help recruit A-list free agents to join him on the Lakers this summer.

With Magic Johnson almost laughing at the notion that the team would even consider trading James this summer during his appearance on First Take yesterday, the hoops legend also added that LeBron would win a title.

–@MagicJohnson says @KingJames will win a title with the Lakers. (via @FirstTake) pic.twitter.com/Zv50zEjHOm

The current state of the Lakers is a complete mess. But with the No. 4 overall pick in this year’s NBA Draft and a bunch of money to spend on free agents, this time next year could be very different for the franchise. And it seems like LeBron James will continue to be the centerpiece of the entire operation.