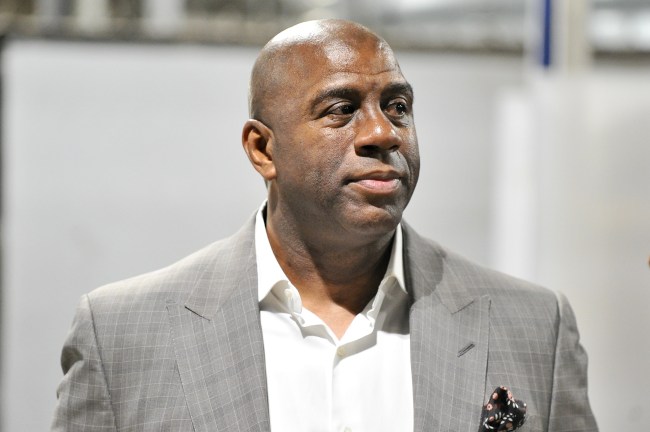 Magic Johnson, even after resigning from the Los Angeles Lakers a couple months ago, just added a little bit more dysfunctional gasoline to the burning fire that is the beleaguered franchise. While there were a bunch of rumors floating around about why the Lakers legend may have left his post as President of Basketball Operations, the most obvious one was Johnson’s awkward relationship with the team’s general manager Rob Pelinka — which never seemed to be quite as strong as it should have been to be successful.

Appearing on ESPN’s First Take this morning, Magic Johnson didn’t exactly say anything to squash the notion that he and Pelinka had a contentious relationship, even going into detail about how Pelinka was backstabbing him within the franchise and, yep, even outside of it, talking about Magic’s work ethic and available hours of work for the Lakers. Take a look at the video below.

Magic Johnson identifies Rob Pelinka is the person who was backstabbing him. pic.twitter.com/3mul9lJuzi

This is just even more embarrassing for the Lakers, as Magic Johnson — who no longer has any official role with the team — is dishing out some dirty laundry and taking some parting jabs at the man who’s no in charge of all personnel moves since the departure of Magic. The Lakers aren’t hiring anyone to replace Johnson, meaning Pelinka has an elevated role now.

With the offseason being, arguably, the most important in franchise history, the fact that Magic Johnson’s going on national TV to throw shade at Pelinka’s a terrible look. It’s not exactly a ringing endorsement for some of the top-level free agents this summer — like Kevin Durant, Kyrie Irving, Kawhi Leonard and Klay Thompson, among others — to join the team; with most of those guys, if not all, linked to the franchise. And, if what Johnson claims is true and Pelinka was acting like a high school kid gossiping about his boss, who’s to say he knows anything about what the hell he’s doing to build the iconic team towards championship level?

Look, people aren’t always going to agree on things when it comes to doing business — and Magic Johnson did mention that the business people getting in the way of the basketball people ultimately led to him leaving. But for Pelinka to throw Johnson under the bus and backstab him to as many people as possible is low, and it just makes the Lakers even more laughable.