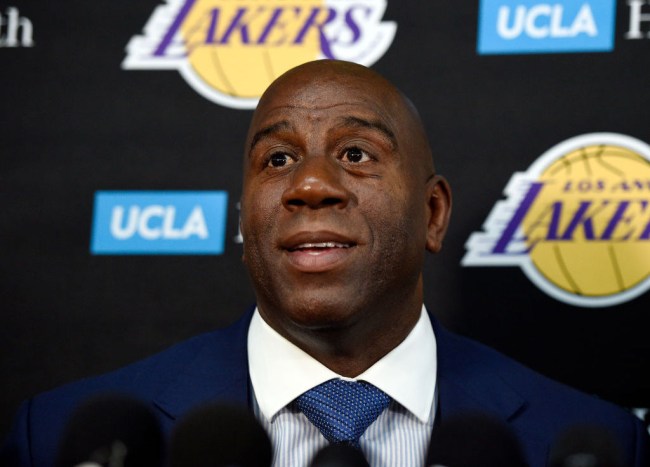 The Los Angeles Lakers had pretty high hopes heading into this year’s season after acquiring LeBron James but there was only so much the superstar could do to cancel out the fact that the rest of their roster is kind of ass.

After an incredibly underwhelming campaign, Magic Johnson held a press conference to the surprise of everyone—including Lakers owner Jeanie Buss and LeBron James—and announced he was stepping down as the team’s President of Basketball Operations and sparked some major drama that threw the organization into even more disarray.

Johnson initially said he resigned because he wasn’t a fan of the day-to-day responsibilities that come with the job but it didn’t take long for rumors to start to swirl concerning the real reason he stepped down, with some people saying he was butting heads with Buss and other claiming he was preempting an article concerning his questionable behavior with some Lakers employees.

However, things got even weirder earlier this week when Johnson revealed he was still working with the Lakers despite saying he was over the whole thing.

Things took an even more interesting turn yesterday after a report surfaced claiming the real reason Johnson quit was that he was CCed on a series of emails between Buss and GM Rob Pelinka that tore into his job performance.

“My understanding is that there were some emails that were exchanged between Rob and @JeanieBuss…about @MagicJohnson and about what Magic was and wasn’t doing. They were critical emails.” @RicBucher | @TheHerd #LakeShow #Lakers #NBA pic.twitter.com/Q5u7u2TgIq

On Thursday, the situation got even juicer when Johnson seemingly subtweeted the Lakers.

The truth will always come to light 😊

While it’s not entirely clear what his message means, if I had to guess, I’d say it might only be a matter of time before we hear his side of the story.

I’m going to need a lot of popcorn for this one.