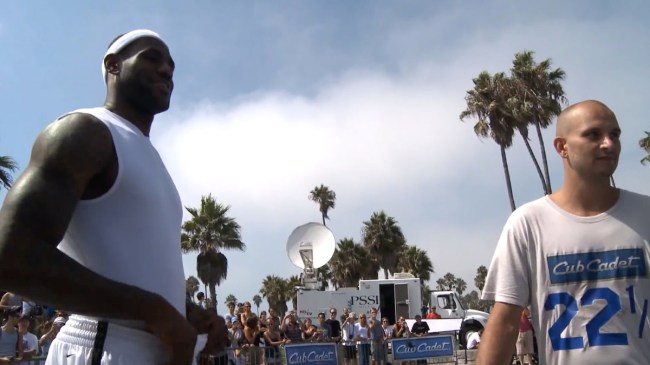 “You can’t teach height” is a pretty common saying in the basketball world, and as an abnormally tall dude, my freakishly elevated stature provided me with plenty of potential to become a force to be reckoned with on the basketball court.

You can, on the other hand, teach skill, but sadly, I was an incredibly subpar student of the game, which is why I currently write on the internet for a living as opposed to having people on the internet write about my dominance of the NBA.

I often wonder if things would’ve been different if I’d used the hoop in my driveway to perfect my hook and work on my midrange shooting instead of spending countless hours trying to nail circus shots that I would never have the opportunity to attempt in an actual game. Sadly, that’s just one of those questions in life that will forever go unanswered.

Of course, basically everyone who had a basket at home growing up devoted a solid chunk of their childhood to attempting absurdly low-percentage shots, but unless you were playing with other people on the rare occasion you made one, you had to settle for the personal satisfaction that came with nailing it when there was no one around to see it fall.

However, that all changed when YouTube burst onto the scene, as anyone with a video camera suddenly had the opportunity to share their ridiculous feats with the world.

That is precisely what five roommates from Texas A&M did when they launched Dude Perfect back in 2009 and quickly became internet sensations thanks to their proven formula of attempting the same shot hundreds of times until they make it and proceed to freak out like a group of people who just saw David Blaine perform street magic.

The dudes of Dude Perfect might be the most famous trick shot artists on YouTube but there were others who came before them—including David Kalb, who started uploading videos of the shots he made in the Los Angeles warehouse he worked as a manager at in 2008.

It was right around that time that LeBron James announced he was looking to take someone on in a trick shot competition and Kalb—who, interestingly enough, played basketball at the University of Akron—decided to try his luck by submitting his highlight reel and managed to earn the honor of taking on The King.

With the NBA set to kick off its HORSE competition this weekend,  someone over on r/NBA dug up a video of their showdown on a court in Venice Beach where James found himself handily outmatched by Kalb, who earned the honor of going through the rest of his life with the kind of bragging rights most people can only dream of.

Kalb also posted a longer video of the competition if you’re so inclined (as long as you don’t mind the fact that it appeared to be filmed on a flip phone).

Someone in the Reddit thread who said they’re related to Kalb shared he’s currently teaching English in Istanbul but he’s regularly updated his YouTube channel since he claimed victory and it seems like he’s still got it.

He might not be worth the estimated $220 million Dude Perfect is but at least he has a claim to fame those guys likely never will.