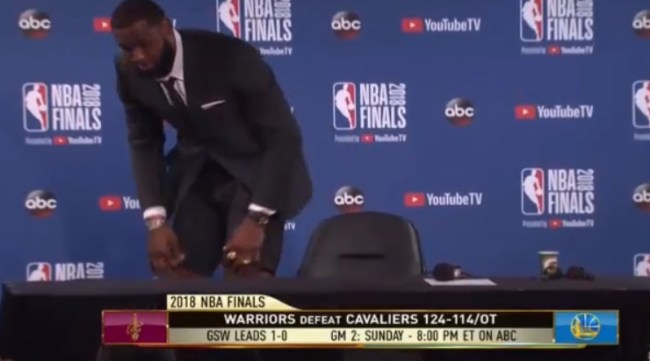 LeBron James was not having any b.s. tonight. After tonight’s heartbreaking loss the Warriors in game 1, LeBron was forced to field questions about JR Smith’s boneheaded play late in the game where he decided to hold on to the ball and not call a timeout after grabbing a rebound late in the game.

One reporter, ESPN’s Mark Schwarz, got under LeBron’s skin when he repeatedly asked him if he knew exactly what was going through JR’s mind at the time of the play.

Here’s the video of the testy exchange.

Scwarz: What’s your version of the final play?

LeBron: What do you mean what’s my version?

Schwarz: Did he know that the game was tied? or did he think you guys had it salted away?

Schwarz: I was just trying to see if you knew exactly what JR’s state mind was.

Schwarz: Are you not sure?

LeBron: What do you mean I’m not sure? I don’t know his exact state of mind.

Schwarz: Do you know if he knew the score?

Earlier in the night, Schwarz got into a similar awkward interaction with Steph Curry when he repeatedly asked the same questions about JR’s mindset after the game.

Here's Mark Schwarz from ESPN asking Steph Curry the same dumb question he asked LeBron about JR Smith over and over again pic.twitter.com/YoeX2vbDMb