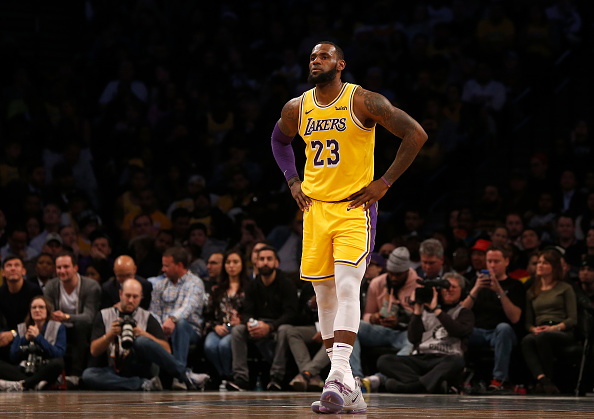 Next week 2019 begins, yet the NFL kneeling during the National Anthem protest during the summer of 2016 still dominates headlines and the controversy doesn’t appear to be dying down in the new year. LeBron James reignited the heated debate on Friday night when he condemned NFL owners for having a “slave mentality.”

During his HBO show The Shop on Friday night, LeBron said, “In the NFL they got a bunch of old white men owning teams, and they got that slave mentality.” The NBA superstar continued, “And it’s like, ‘This is my team. You do what the f*ck I tell y’all to do or we get rid of y’all.'”

“The players are who make the ship go. We make it go. Every Sunday, without Todd Gurley and without Odell Beckham Jr., without those players, those guys, there is no football. And it’s the same in the NBA,” LeBron said his 30-minute barbershop-themed talk show that has conversations about life and sports. Los Angeles running back Todd Gurley was one of this episode’s guests.

“I’m so appreciative in our league of our commissioner,” James said of Adam Silver. “He doesn’t mind us having … a real feeling and to be able to express that. It doesn’t even matter if Adam agrees with what we are saying, he at least wants to hear us out. As long as we are doing it in a very educational, nonviolent way, then he’s absolutely OK with it.”

“The difference between the NBA and the NFL, the NBA is what we believe he [a player] can be. The potential,” James added. “In the NFL, it’s like what can you do for me this Sunday, or this Monday or this Thursday, and if you ain’t it, we moving on.” Gurley tagged that sentiment by saying, “That what I say: Your best ability is availability. … It’s really week by week. It ain’t no year by year.”

The “slave owner” comments struck a nerve on the internet with some agreeing with him and some disagreeing and even calling him hypocritical.

The man is speaking the truth. LeBron James: NFL owners are ‘old white men’ with ‘slave mentality’ toward players https://t.co/pSNduD91zr

LeBron is right: sports leagues get in trouble when they forget its about the players, the coaches, the fans, the game, the drama. LeBron says NFL owners have 'slave mentality' – via @ESPN App https://t.co/jbc5wlYwYM

I respect Lebron on many levels. The most impactful athlete Ill ever see in my lifetime, easily

This comment seems odd considering his $1 Billion Nike contract is made possible through the use of actual slave labor in overseas sweat shops. I wish he’d speak for them as well https://t.co/8WQfd5RTZw

LeBron says NFL owners are slave masters. Really. I must have missed the part in the history books where slave owners paid their slaves millions of dollars to voluntarily play a game. pic.twitter.com/GFMbaSkcjW

He literally just described any workplace.

LeBron James has a contract with Nike for over $1 billion. In 2017, 500+ workers in 4 factories for Nike, Puma and Asics were hospitalized due to poor working conditions including factory temperatures being over 90 degrees. They work 10-hour shifts 6-days-a-week for $0.23 an hour

The U.S. national anthem protests started in August of 2016 when Colin Kaepernick began kneeling during the National Anthem during preseason NFL games. Kaepernick was protesting against racial injustice in the United States. The hot-button topic has been a raging wildfire of debate ever since and even one of the main rallying cries for President Donald Trump during his presidential campaign and during his time in the White House.