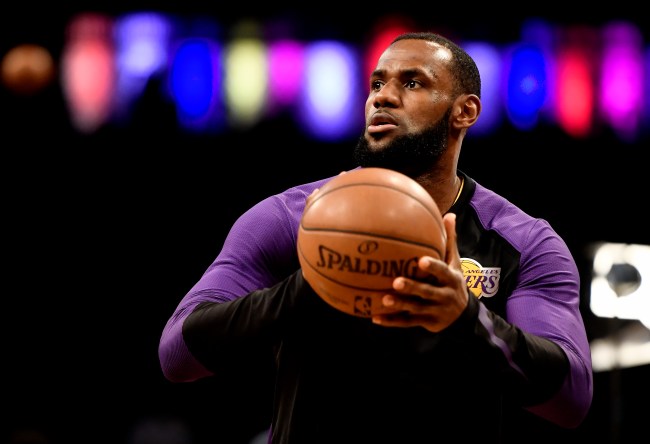 LeBron James is the greatest all-around basketball player I’ve ever seen. Sure, all you who know me will call me out for being a little bias because, like James, I, too, am a 34-year-old, stud athlete from Northeastern Ohio, but, hey, we’ve got to stick together, nah mean? In addition to his freakish basketball skills and social influence, though, LeBron’s also served as a mentor for a younger generation; especially in sports.

While most of his influence comes from younger basketball players who, one day, hope to be as successful as he is, that’s not always the case. And LeBron James reminded us that he’s a calming voice for his own kids in the heat of a battle, too — and it’s pretty awesome to see.

Talking to his 11-year-old son, Bryce James, LeBron put his arm around him and sat him down to give him an awesome pep talk. Not sure the entire situation, but it seems as if Bryce was mad at himself for missing a bunch of shots in a game he and his team just won. LeBron, being the ultimate motivator and teacher, simply reminded Bryce that there’s more to basketball than just scoring, replaying three big plays that his son made to help lead his team to victory. Take a look.

I know it’s weird publicizing a moment when a dad’s simply being, well, a good dad, but because it’s LeBron James and his son, it’s pretty cool to see. I mean, this is the most polarizing athlete on the planet we’re talking about here, and he’s just casually on the sideline offering advice to his son like any involved parent would be. Except, you know, LeBron’s LeBron.

With all due respect to my mom and dad, who are successful and are major influences on me, having a guy like LeBron James in your own household to give advice on something that he’s absolutely mastered is a pretty good resource to have. Something tells me Bryce took the words in stride.