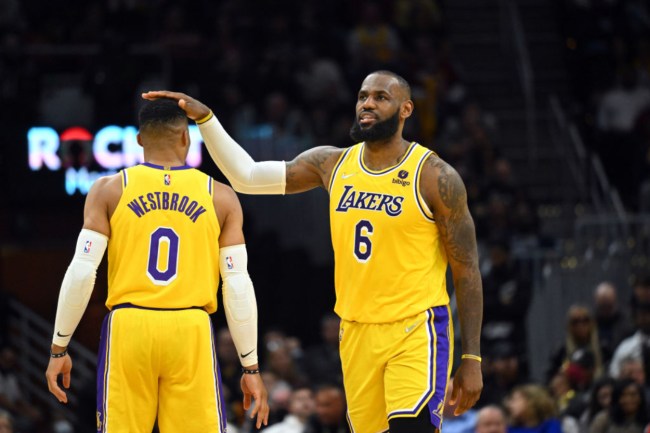 LeBron James held his end-of-season exit interview on Monday with the Los Angeles Lakers’ disappointing season officially coming to an end. Russell Westbrook was a topic of discussion, and James shared a clear-cut message about the point guard and his future in Los Angeles.

The entire veteran-led experiment for the Lakers failed miserably this season, and Westbrook’s inconsistent performance all year undoubtedly cost the Lakers throughout the year.

That doesn’t mean James is ready to shake things up, however. It’s clear that he wouldn’t mind running it back with Russ yet again next season.

“One thing about Russ that I love, and will always love, is his competitive spirit and what he brings to the game every single night,” James explained.

“I’m not going to sit here and make decisions for the front office, but I love being teammates with Russ.”

"I'm not going to sit here and make decisions for the Front Office, but I love being teammates with Russ."

LeBron James on Russell Westbrook as a teammate. pic.twitter.com/gEdRx1Vhnz

Westbrook is signed thru the 2022-23 season carrying a salary of over $44 million, so James’ wish to keep Russ in L.A. will likely come true. Not many teams around the league want to take on that sort of contract for Westbrook’s output.

Amid the Lakers’ struggles this season, many in the media have suggested the Lakers look to trade either Anthony Davis or Westbrook to shake things up and get back to their winning ways.

After these comments from James, it’s safe to say that he wouldn’t exactly be happy to see Westbrook get dealt. More often than not, James gets his wish.