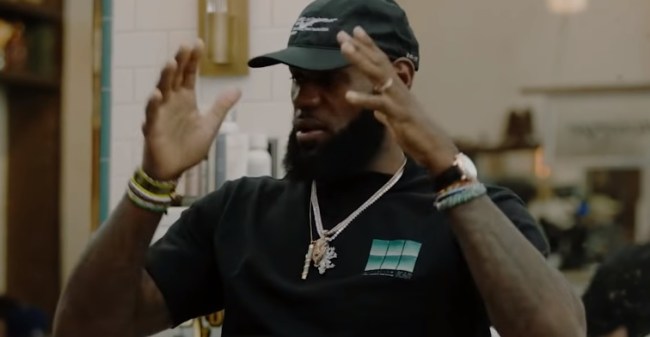 During the discussion on race in last night’s episode LeBron spoke on how white and black athletes are held to different standards.

LeBron went on to give a hypothetical scenario of how a star white athlete like Tom Brady or Aaron Rodgers is treated differently than a star black athlete for reacting the same way towards unruly fans in public.

Here’s a clip via @Ballislife.

If it’s (Tom) Brady, if it’s (Aaron) Rodgers, if it’s (Peyton) Manning. And we’re doing the same shit), the same exact shit,” “I’m talking about a phone is out. We’re like, ‘Yo, get that fucking phone out of my face. I’m with my family.’

While some viewers seemed to be turned off by the language in “The Shop”, the consensus around the Internet is that LeBron and HBO have a hit on their hands.

This should not be a surprise because it’s LeBron and everything he does is great. But “The Shop” was awesome. Such a smart idea and fantastic execution by @KingJames and his team. So real. So important. Such compelling conversation.

I really glad The Shop showed how these guys really talk when we the media aren't around. Good stuff.

.@KingJames foray into media along with @mavcarter is going to change the game. People have been craving for more connection to athletes off the court. But this feels authentic and raw in a way interviews never can. They got women in the barber shop. Inclusive. It’s radical.

HBO's The Shop: extremely powerful and well done. One of the best things HBO has done this year.

I only have one criticism of The Shop: It needs to be an hour. Other than that, outstanding television.

If you haven’t watch “The Shop” yet, you should definitely check it out.