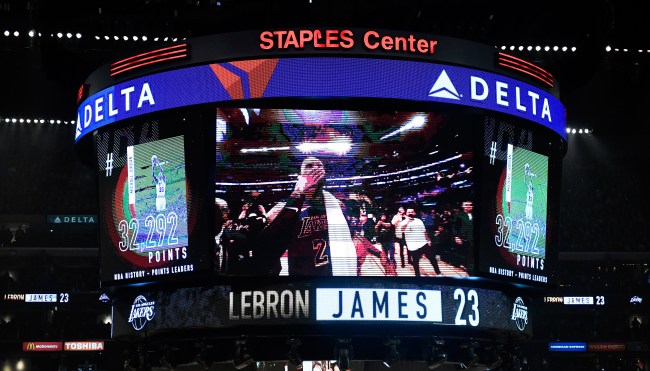 He did it before the second quarter was even over.

As the Staples Center played a video honoring James for his milestone, LeBron was visibly emotional as he sat on the bench.

During the game, James paid tribute to the man he passed, Michael Jordan, with a special pair of LeBron 16 shoes that honored His Airness with a little Air Jordan 3 flair, complete with LeBron’s own version of the Jumpman silhouette.

James also added his own personal touch with a handwritten message to Jordan that read, “Thank you M.J. 23.”

On the night he passed Michael Jordan on the all-time scoring list, LeBron thanked MJ on his shoes 👑 pic.twitter.com/OoHSfDJbKE

Later, two of James’ ex-teammates, Channing Frye and Richard Jefferson, congratulated him with a comical video, calling him a ballhog, telling him to pass more, and harassing him for how long it took him to finally pass Jordan.

Now that there is how true bros congrulate a buddy on an achievement. Wonder how much LeBron is missing those guys right about now?

After the game, when asked what it was like to pass one of his idols, here’s some of what James had to say…

“I mean, me and my friends, this is all we talked about, MJ. All we talked about was MJ. …We used to play outdoor ball, in the snow, and we all wanted to be MJ, every last one of us. It’s crazy.”

Did he mention how crazy it is? Okay, good.

“I always tell you guys, when you’re like an inner-city kid from Akron, Ohio, like myself and my guys growing up, you look for anything, any lightning in a bottle that can help inspire you because you’re just always put up against the numbers of failing. The percentages of guys like myself, single-parent households, only child, underprivileged. Making it out, it’s not high, it’s not high at all. And MJ had a lot to do with me making it out.”