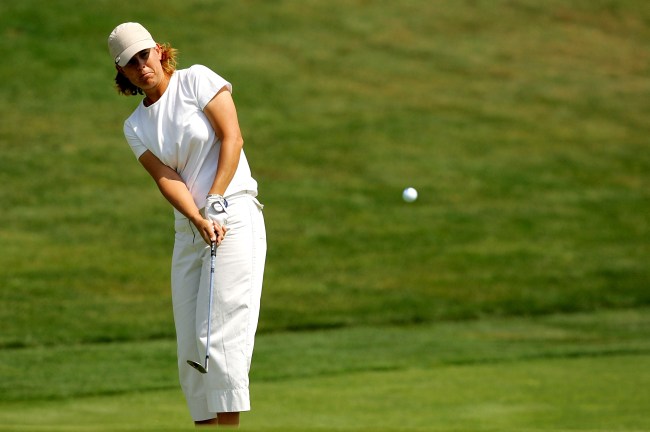 This might be the greatest thing to ever happen for us regular hackers. Lee Ann Walker, a professional golfer who is good enough to be entered in this week’s Senior LPGA Championship in French Lick, Indiana, was assessed a whopping 58 PENALTY STROKES in the tournament’s first two rounds.

That is not a typo. Lee Ann Walker received 58 PENALTY STROKES in two rounds.

From now on, no matter how bad we golf, whatever mistakes we make on the course, at least we can forever say, “Hey, at least I didn’t get assessed 58 penalty strokes like that LPGA golfer did back in 2019.”

The question, of course, is how did this happen? What did Walker do to earn such a monumental penalty?

First, let’s point out that without the penalty strokes, Walker would have shot 85-74 and would have missed the cut by one shot. Not too shabby.

Second, the last time Walker played a full LPGA season was in 2008 and there have been MANY changes to the Rules of Golf since then.

Still, she’s a professional. This is egregious.

According to The Golf Channel…

The penalties were added to her scores after Tuesday’s second round, when her opening-round score was adjusted to 127 and her second round to 90. Each violation of Rule 10.2b(4), which prohibits a caddie from lining up a player, was a two-shot penalty. They were assessed after Walker realized during the second round that she was violating the new rule, which was implemented at the start of this year.

Golfweek reported that a fellow competitor’s caddie informed Walker midway through the second round that she was breaking the rule. Walker then sought an official to report her violations.

Walker was forced to add 42 shots to her first round score, and another 16 in the second round.

“I may have made the Guinness Book of World Records,” joked Walker afterwards.

She told The Golf Channel that she played the entire first round breaking the rule and neither of her playing partners, Jackie Gallagher-Smith and Cathy Johnson-Forbes, said a word.

“They made me aware of it on 14 or 15, and I called a rules official to ask what to do,” said Walker. “They had me continue playing so they could have a conference on the violation and what I needed to do.”

Walker said that despite the ignominy of having to take 58 penalty strokes, she still had fun.

“Everything was great except for my penalties,” she said.