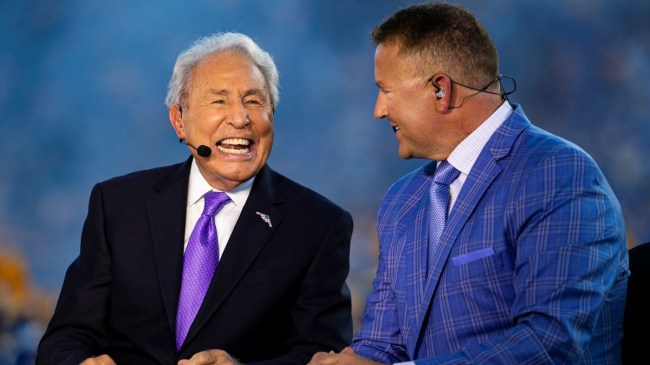 Much has been made this season but the apparent declining health of ESPN CollegeGameday host Lee Corso. After all, Corso is 87 years old and has been on the show for 35 years now. But any comments or complaints have been made in the best interest of the longtime headgear-wearer.

Which explains the outpouring of concern when Corso was forced to miss two weeks of the show with an unspecified illness. That outpouring grew even louder earlier this week when a sudden rumor sprung up that the GameDay crew canceled its trip to Knoxville because Corso had passed away.

Thankfully, Kirk Herbstreit quickly clarified that the rumor was false. Not only was the show still coming to Knoxville for the showdown between No. 6 Tennessee and No. 3 Alabama. But the cast of the show would be made whole again with the return of Corso.

That proved true on Saturday morning when Corso made his triumphant return.

It’s GREAT to be back! 🙌❤️ pic.twitter.com/4wHxFRtKnE

Not only were Tennessee fans fired up to have Corso in town. But college football fans all across the internet showed an outpouring of love and support for the GameDay legend.

"The Great Lee Corso is back with us!" 🧡 pic.twitter.com/bbzel50Cl0

They got him a pass out the Assisted living.🤣😅😬 Awesome..some folks thinks he should not be on no more but this is what makes him happy. Ageism is so cruel. Let that man live doing what he loves! https://t.co/r43dzcUTMy

LC is back. All is right in the world.

You can tell how excited they all are to have Corso back on the desk. And he just ignores it and gets right into the football talk. Great moment. https://t.co/b39VzaaWlN

And he deserves to be on that damn show until the end of time and anyone who thinks differently clearly just hates old people https://t.co/0mKxnYyGBZ

But Corso isn’t the only big name to appear on College GameDay on Saturday. The usual cast of characters will be joined by Tennessee legend Peyton Manning as this week’s guest picker. Though not every Volunteers fan is happy to have Manning back on campus.

That’s because of the long-running Manning Curse. The curse originated on ESPN’s Monday Night Football ManningCast. But its powers may yet reach beyond just the Monday night games. Tennessee also boasts a less-than-stellar recent history with Manning in Neyland Stadium.

So the Volunteers will undoubtedly be up against it when the powerhouse Crimson Tide rolls into town.