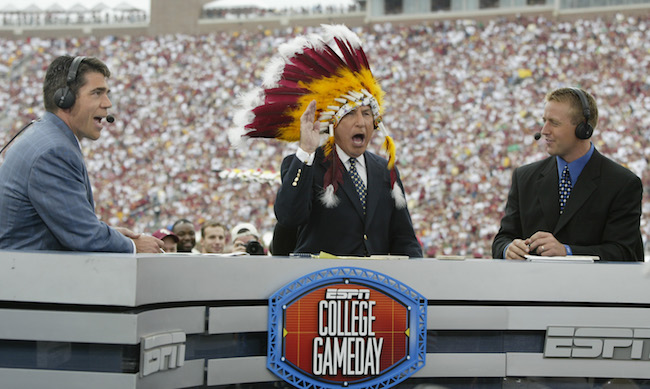 ESPN’s College GameDay means different things to different people. If you’re a student when the show travels to your school, it involves doing some arts and crafts the night before and then waking up at an ungodly hour, filling up a flask, and hoping someone on the internet will take a screenshot of your sign. If you’re a normal person, it’s an excuse to start drinking earlier than you probably should, and if you’re Lee Corso, it involves having any analysis you might give overshadowed by whatever comically large mascot head you decide to don when picking a favorite team.

Corso has been a part of College GameDay since its inception over 30 years ago, and he’s shown a penchant for oversized headgear during his time behind the desk. I’m not sure if “Most Mascot Heads Worn” is recognized by Guinness, but if the guy who set the record for the world’s longest fart got an award, I don’t see why Corso can’t.

Given his experience, I think it’s safe to say Corso is an authority when it comes to mascots. In a conversation with AL.com’s Mark Heim, he was asked about his least favorite head to put on and revealed there was one that gives him more trouble than any of the others.

Given their record last season, he might not have to worry about that for a little while.