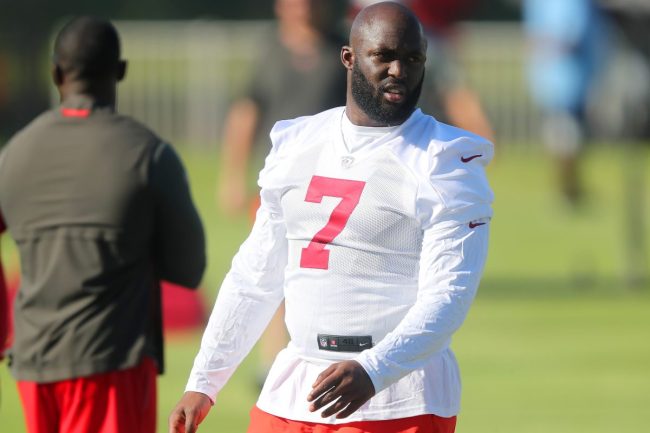 Many around the NFL have been critical of running back Leonard Fournette’s weight gain this offseason. The bulldozer showed up to the Bucs’ training camp around 240 pounds. That was 10-15 lbs over his typical playing weight.

He committed to a weight loss plan, shedding some unwanted poundage over the month of June. That extra bulk quickly turned into muscle as the bruiser got back to playing form.

While he might’ve lost the weight, he hasn’t lost his sense of humor. Over the weekend, Fournette sent a message to his haters on social media. The hilarious response comes just days before camp is set to begin.

Fournette cropped his head into the frame of the picture, having a laugh for those that have been critical of his offseason weight gain. He doesn’t seem to mind the hate thrown his way throughout this offseason, and something tells me he’ll be ready to go once the season rolls around.

Fournette will look to build upon a 2021 season where he rushed for over 800 yards and scored eight touchdowns. The back racked up his third year totaling more than 1,200 yards from scrimmage, and he’s hoping to get the Bucs back to the Super Bowl in 2022.

Tampa Bay won the Lombardi trophy in his first season with the organization. They fell a bit short last year, losing to the eventual Super Bowl champion Rams. Fournette will use that loss, as well as the offseason weight hate, as fuel for the upcoming campaign.