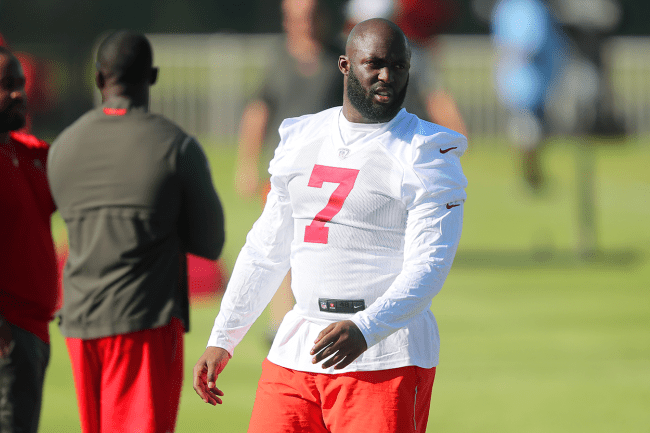 Leonard Fournette arrived at Tampa Bay Buccaneers camp for the first time on Tuesday. He looked thick, and not necessarily in a good way.

Fournette, who is entering his seventh year in the NFL, is not a small running back. The former LSU Tiger is a bruiser.

However, when he showed up to minicamp, there was a lot of buzz about his weight. Fournette did not necessarily look “beefy in a good way” like how Jets head coach Robert Saleh described quarterback Zach Wilson. He looked beefy, period.

During the 2021 season, Tampa Bay listed their top running back at 228 pounds. After signing a three-year, $21 million deal during the offseason to stay in Florida, he showed up to mini-camp at 240 pounds.

Leonard Fournette got BIG in the offseason 😳

Not only was he heavier on Tuesday than he was at any point in his career, but he was reportedly having a little bit of trouble in the heat. Fournette was sluggish, essentially.

RB Leonard Fournette made his first appearance in the off-season and seemed to be a little heavy and struggled some in the heat, dropping a few passes. But Bowles said he looked fine, especially considering he hasn’t been here in their off-season.

Despite some potential early-season struggles, Fournette was a full participant in his first day of mini-camp with the Bucs.

A pretty good look at running back Leonard Fournette before today’s minicamp practice.

He was a full participant and is working to get back into the shape he wants. #Bucs pic.twitter.com/5ZZRWa6iMj

Additionally, Fournette knows that he has some work to do. He was very active in posting his workouts on Instagram during the offseason and, most of the time, they were weight-lifting-focused— and big weight at that.

It is very possible that Fournette’s fairly significant weight gain was intentional. He may have been preparing for a bulk-and-cut because he has plans to drop weight at camp and will likely shed all of the extra poundage in just a few weeks of workouts in the Florida heat.

#Bucs RB Leonard Fournette said that the fastest he’s ever ran was at 23 MPH.

He also spoke on dropping weight before training camp. He’s at 240-something right now and his ideal playing weight is 228-230. pic.twitter.com/kamCgv3Z6j

All of this goes to say that Fournette might look heavy/thick/fat now, but he is going to look like a brick house once he drops the extra fat.