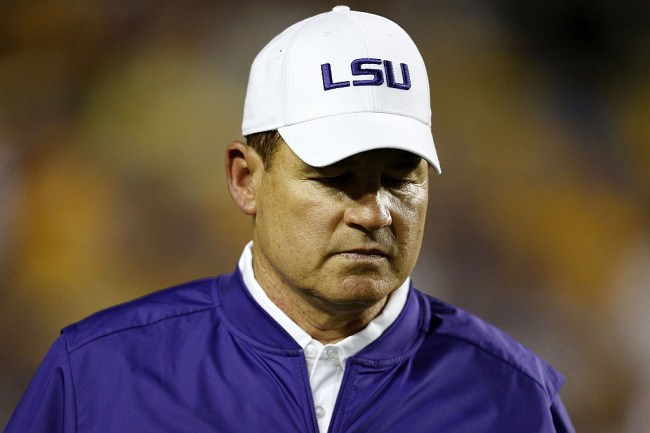 Les Miles is the new head coach at Kansas which is a sentence I never thought I’d write. After over a decade at LSU and a national championship victory in 2007, the 65-year-old Miles will replace David Beaty as the Jayhawks head coach. In four seasons calling the shots at Kansas, Beaty posted a less-than-admirable record of 6-41 (2-33 in the Big 12).

Miles is now tasked with rebuilding a roster by potentially dipping into the Kansas-area recruiting pool. As SB Nation points out, the state of Kansas produces numerous Power 5 signees per year from its population of three million people and the school is hoping that attaching a big name like Les Miles to the program will attract homegrown talent.

During an official welcome press conference this weekend, Les took some time to let the media know just how big of a boost his team will be to the community.

What ensued was one of the more cringeworthy brain farts ever caught on camera.

And as the internet does, it ate this blunder up like Thanksgiving stuffing.

That moment when you realize … “I'm the football coach at KU."

Apparently Les was distracted by Jeff Long in the back doing this when he mentioned community involvement. 🤣 pic.twitter.com/ZozHPWtm17

He should have called a timeout there.