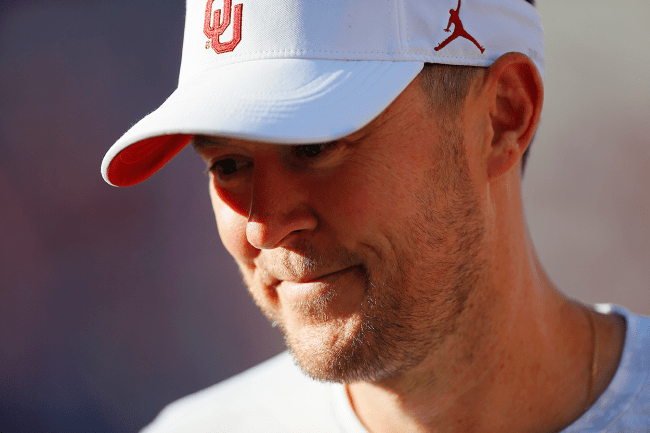 As the coaching carousel continues to spin in Baton Rouge, one name in particular is being thrown around a lot. Ever since LSU announced that it was parting ways with Ed Orgeron, Oklahoma head coach Lincoln Riley has been linked to the opening.

Earlier this month, Riley missed a scheduled news conference and his weekly radio show without providing an explanation. It immediately set off rumors that he was off interviewing with LSU.

Lincoln Riley will NOT be available today as scheduled at his press conference. Outside receivers coach/associate head coach Dennis Simmons will speak in Riley’s place, followed by defensive coordinator Alex Grinch.

And then, on the same day that Riley missed his appearances, a notable flight was discovered from Norman to Baton Rouge.

I mean take what you want from this LSU private plane flight route from this morning. But there was definitely a flight to and from today. pic.twitter.com/CfphPlu5uv

Riley was at practice that day, so it was unlikely to be him, but the chatter continued anyway. And then, late last week, an interesting group of people with strong ties to LSU followed the Oklahoma head coach on Twitter. Among them was the university’s basketball and baseball coaches.

The rumors are plentiful, and the general consensus (even though it is all speculation until it is official) is that Riley is headed to LSU.

Meanwhile, Riley is taking the classic approach to the coaching rumors. He is denying any connection to the Tigers and continues to say that his allegiance lies with the Sooners.

That did not stop Oklahoma State from trolling him into oblivion.

During Saturday night’s rivalry game in Stillwater, the team blasted ‘Calling Baton Rouge’ over the loud speakers. It is a song with strong ties to LSU for obvious reasons.

The troll was subtle, but savagely brilliant.

If you listen closely in the background — Boone Pickens Stadium is blasting "Calling Baton Rouge".

Incredible troll move to pull out this early. pic.twitter.com/Ykv3JxaCrX

After the game, which Oklahoma lost, Riley was asked about the idea of donning purple and gold. He made his most definitive statement regarding the rumors yet.

During his postgame press conference, Riley cut off a report who asked about the LSU reports and said emphatically, “Let me stop you right there. I’m not gonna be the next coach at LSU. Next question.”

Lincoln Riley: "I'm not gonna be the next coach at LSU. Next question."#Sooners

Technically, Riley is not lying. Orgeron is not coaching the bowl game if the Tigers are chosen and the team’s offensive line coach will be the interim.

Ed Orgeron announces this is his last game coaching at #LSU.

OL coach Brad Davis will take over as interim HC if the Tigers are chosen for a bowl game (they are now eligible at 6-6).