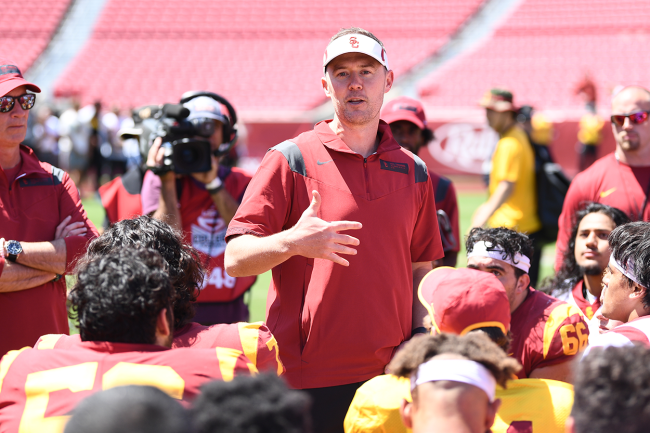 It has been five months since Lincoln Riley sent shockwaves across college football by leaving Oklahoma for USC. The move came out of nowhere and that’s what Riley continues to say— that it happened overnight.

However, despite his continued insistence, there are a lot of questions about how such a big decision could have happened in such a short period of time. In addition, there has been a lot of speculation that Riley’s move was largely to avoid the Southeastern Conference, as Oklahoma gears up to change conferences in a few years.

Riley says that is not the case. He recently spoke with 247Sports’ College Football Daily Podcast and doubled (or tripled, quadrupled, etc…) down on how and why he left the Sooners for the Trojans.

In particular, Riley wanted to be very clear that his letter to The Players’ Tribune explaining the whole process was not something of a pander for good will.

Here is what Lincoln Riley had to say about The Players’ Tribune letter:

“Yeah, I mean, I wrote it several weeks back,” Riley said. “It was difficult to kind of express it all and I wanted to find the right kind of route to say some things that I wanted to say. I didn’t write it to get a reaction to try to change anybody’s mind. That was not my goal in it. My goal was — it happened so suddenly. One day, I’m the coach at the other spot. And then, all of a sudden, this happens and it goes so quick.

“And I just never really felt like I had the right time to say some of the things that I wanted to say. You sit there and all these other people want to determine the narrative about what happened or want to define it. Guess what? This is my life. And I felt like that there were some things that I simply wanted to say. So it was a good — felt like the right route to do it and glad I was able to get it done and kind of say my piece and be able to move on.”

In addition, Lincoln Riley made it abundantly clear that he did not leave Oklahoma to avoid the SEC.

During his appearance on the College Football Daily Podcast, Riley (as OU AD Joe Castiglione has before) vehemently denied anything of the sort. It marked the first time he had spoken directly about the SEC speculation.

“No, there’s not any truth to that,” Riley said. “I mean, I took a pretty big job when I was 33 years old. And the reality of the matter is the easier thing for me would’ve been to stay at OU. I mean, that program was running at a high level. And family’s settled, staff’s settled. I mean, a lot of things that were going really well and I absolutely think will continue to go well — it’s a tremendous program. So that program’s going to be just fine. But the easier thing would’ve been to stay. And it’s tremendous in every sense.

“But the chance to do this at this place combined with some of the opportunities for my family off the field — the life away from it, the chance to live in this place, educational opportunities — it was just, at the end of the day, it just really was the right place at the right time. And if you’re afraid of a challenge, you don’t take the head-coaching job at OU when you’re 33 years old. You don’t come out to USC to do this. I mean, that’s — the people that know us and know us well know we embrace those things, just like we’re going to embrace it here.”

Whether Riley is telling the truth or not, we will never know. However, based on what he has already built in such a short time at a program that has a much greater legacy and history than Oklahoma, the decision is working out just fine for him so far.