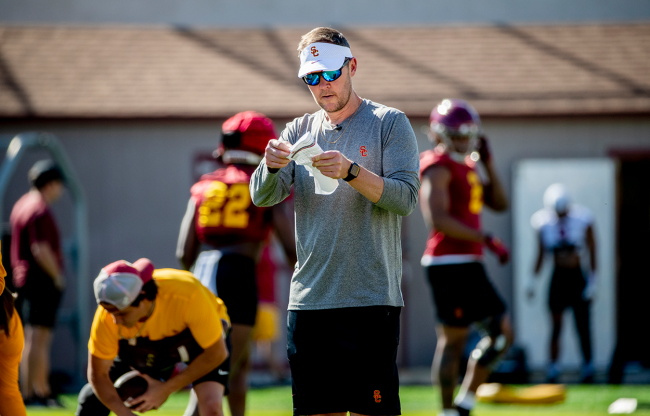 Lincoln Riley’s decision to leave Oklahoma for USC sent shockwaves across college football back in November that are still being felt in April. As the Trojans finish up spring practice with their first-year head coach with a spring game on Saturday, Riley addressed the move in a recent letter in The Players’ Tribune.

Although he stuck by his story, Riley offered some remorse.

According to Riley, the USC job came together overnight. Leading up to Oklahoma’s final regular season game against Oklahoma State, there was a lot of speculation that he was going to leave for the LSU job.

Riley was adamant that he was not leaving for LSU. He didn’t lie.

However, he did bounce for Los Angeles. Riley’s timeline says that USC called him shortly after he and the Sooners lost to the Cowboys, he briefly slept on the decision, and the contract came together early the next morning.

In his Players Tribune letter, Riley stood by his Oklahoma to USC timeline.

“Everything that happened next was a blur: I jumped on a Zoom with USC officials, I informed our athletic director, Joe Castiglione, of my decision and then, in one of the most difficult moments of my life and career, I stood in front of our Oklahoma team to let them know that I was leaving. I saw the immediate consequences of my decision on the faces of our players. I really hated the timing, because our team was coming off a gut-wrenching loss, but with the recent rule changes in college football impacting the recruiting cycle, it certainly affected the timeline and made a difficult transition even tougher. Shortly after that meeting, USC announced the news, and my family and I were on our way to Los Angeles.”

He also said that leaving Oklahoma was never something that he expected to do.

“As much as my family and I loved Norman and cherished the success we were having on the field, sometimes life throws you curveballs at the most unexpected times. Honestly, I always figured I would end my coaching career at OU. But when my agent called me to pass along interest from USC, I was immediately intrigued by the possibilities.”

In addition, Lincoln Riley said that he does regret some of how things went down.

Since Riley’s departure, there has been a lot of negative response out of Norman. An amish community voiced its displeasure toward Riley, Sooners fans melted down, and even Oklahoma’s governor took a shot at Riley.

Beyond the saltiness, quite a few people close to the situation spoke out about Riley.

Several of his former players called him out for speaking out of both sides of his mouth. One of Riley’s former commit’s moms detailed how he made her and her son feel. Another one of his former recruits took direct shots at Riley. And, most recently, his former tight end spoke out about how weird it was when Riley left and said that he doesn’t believe his timeline.

In his letter to the Players’ Tribune, Riley did not apologize. However, he did own up to how things went down in a last-ditched effort for good will.

“There are aspects of my departure and transition that I would certainly do differently if I could do it again, and I acknowledge that I could have handled some parts of the situation better. I absolutely own that. While I was able to talk with several players after the team meeting, I wish I would have had the time to sit down with each individual player and staff member to explain my decision.”

Part of Riley’s departure and how everything went down was strictly business. Part of it may have been able to be handled better.

Either way, Riley is trying to make some amends. His full letter can be found HERE.