Former Oklahoma TE Details How Weird It Was When Lincoln Riley Left For USC, Doesn’t Believe Him 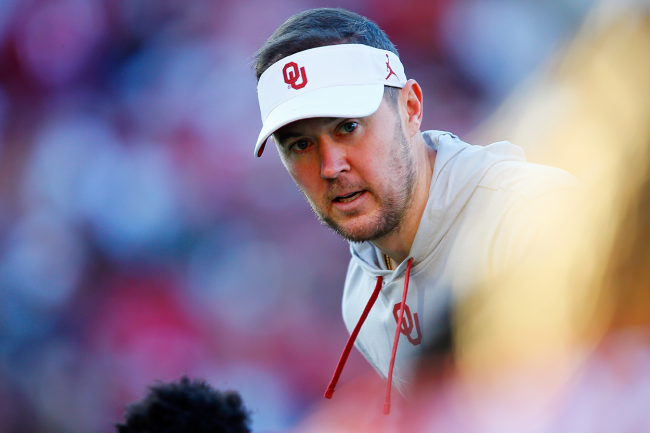 Lincoln Riley’s decision to leave Oklahoma for USC came as quite the shock. The 38-year-old had spent the past seven years in Norman, made four New Year’s Six Bowl appearances, coached two Heisman Trophy-winning quarterbacks and had just built a new, multi-million dollar home.

And yet, after going 10-2 in the 2021 regular season, Riley bounced for Los Angeles.

In the week leading up to his decision, Riley was linked to LSU. He was very adamant that he was not leaving Oklahoma for Baton Rouge, and while he was not lying, his now former players called him out for talking out of both sides of his mouth.

Riley packed up stuff his almost immediately after the conclusion of the regular season and took the head coaching job with the Trojans. He has since claimed that things came together very quickly and that he was not in contact with USC for more than about 12 hours. His timeline said that athletic director Mike Bohn reached out shortly after Oklahoma lost to Oklahoma State and the contract was drafted the next day.

There is no way of knowing exactly what went down, but at least one of Riley’s former players at Oklahoma does not believe him.

In a recent profile from ESPN’s Chris Low, Austin Stogner discussed what went down with Riley and USC from his perspective. The former Sooners tight end was planning to transfer at the end of the season either way, but he was caught off guard by what played out.

Stogner said that after Oklahoma lost in the regular-season finale, it was clear that changes were coming. He also said that neither he, nor his teammates, nor anybody in the locker room new that Riley was on his way to USC.

The former four-star recruit, who has since transferred to South Carolina with Spencer Rattler, said that it’s hard to believe Riley’s story.

“It was weird, all the LSU rumors and Coach Riley never addressed them. It became a distraction for that last game,” Stogner said. “But there was nothing about USC until we were all in the meeting. He kept it under wraps. It’s hard to believe it all happened in 12 hours like he said.”

Whether Riley had one foot out of the door or not, we may never know. At this point it is all history. However, with that being said, it sounds like there was/is a lot of resentment toward Riley in Oklahoma beyond the fans who could not be more salty.