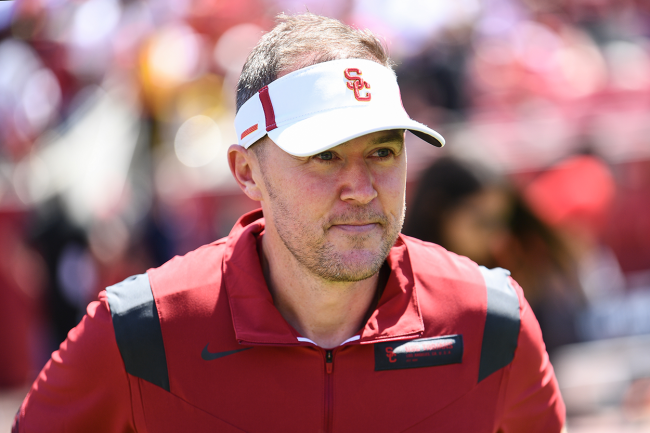 When Lincoln Riley left Oklahoma for USC in November, it sent shockwaves throughout college football. One of the most successful coaches in recent years was leaving his current program to take over one of the most historic programs in history.

After the news broke, rumors and reports began to swirl that Riley was leaving the Sooners because they were soon to join the SEC. Once they do, Oklahoma will have a significantly harder path to the College Football Playoff, and the thought was that Riley didn’t want that smoke.

He has set the record straight before and did so again this week.

Riley claims that the move to the SEC had nothing to do with his move from OU to USC.

“I heard the whole SEC narrative,” Riley told CBS Sports. “To me, the SEC has nothing to do with it. It’s all about the program that you’re at and the position you think you can get to.”

In the same CBS Sports article, Riley explained that the bright lights of Los Angeles, palm trees, and sunshine, (and a lot more money) was too hard to pass up.

“I don’t look at it like where I want to retire, trying to set up stability [at one place],” he said. “I’m 38. I want to experience different things. I want to win. This opportunity is so good, how can you not do it?”

Those words will surely ruffle a few feathers in Norman amongst a fan base that already not-so-lovingly calls him “TBOW,” standing for That Bitch Out West. Riley doesn’t care.

In fact, the 38-year-old head coach of the Trojans seemingly threw shade at Oklahoma and the program’s ability to compete with some of the Alabamas, Ohio States, LSUs, and Georgias of the world. Riley made four College Football Playoff appearances with the Sooners and lost all four semifinal games.

He told CBS Sports that the lack of talent on his roster at Oklahoma was why he lost. Riley also believes that he can build an even better roster at USC that could compete come playoff time.

“I’ve walked into four playoffs, and I’ve never had better than maybe the third-best roster [of the four teams],” Riley said. “Every other year, we were four of four. We had really good rosters, but they weren’t the same. … I can’t imagine that there could be a setting that we could build a better roster than we can here.”

Now, part of Riley’s comments should fall back on his shoulders. If he wanted a better roster that could compete in the CFP, he should have recruited better. But what he is saying, in so many words, is that recruiting talent to USC is easier than recruiting talent to Oklahoma. Shots fired.