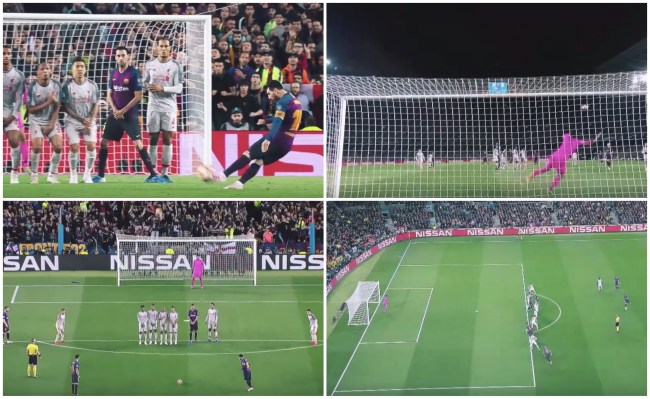 Lionel Messi recorded his 600th career goal for FC Barcelona in this week’s Champions League semifinal thrashing of Liverpool at the Camp Nou in Barcelona. This was the first leg of a 2-game UCL semifinal between Barcelona and Liverpool and Lionel Messi‘s legendary skill was on display when he put a free kick in the back of the net that seemed to defy the laws of physics.

I’m not one to wax poetic about sports but this shot from Messi is truly one of the finest goals we’ll ever see. I won’t even get into the argument of whether he’s the greatest player of all time (or if it’s Cristiano Ronaldo) because that’s a waste of breath when we could all sit back, relax, and enjoy this goal for what it is.

This clip shows Messi’s goal from every angle so we can really appreciate how he ripped apart the space-time continuum in order to put the ball in the back of the net for his 600th career goal for Barcelona.

BRB gonna diffuse some essential oils, light a soothing candle, and watch this Messi gem for the rest of my life pic.twitter.com/LgjSaotnFF

I have to imagine that Lionel Messi was one of the few people on this planet who believed that ball was going in the net when it left his foot. Putting that in the top left corner from outside the box is already a herculean effort but to bend it in the way he did is almost unimaginable. Messi notched his 600th career goal for his club just days after Cristiano Ronaldo scored his 600th club goal last weekend (club goals =/= total goals which include goals for their national teams).

I’d just like to acknowledge that B/R Football‘s Champion’s League coverage on TNT has been nothing short of garbage this season. Instead of in-depth pre-game analysis where they set the stage by discussing interesting matchups, storylines, etc. they’ve decided to roll out a series of animated cartoons about the world’s top players. My apologies to anyone who gives a shit about watching cartoons before games but I’d much rather be given insight into every aspect of a matchup instead of watching cartoon Ronaldo complaining that he looks old.

You might think that Liverpool has a complete stranglehold on the series after winning 3-0 yesterday but stranger things have happened and Liverpool’s inredible offense could explode for a handful of goals at Anfield next week if everything breaks well. PSG beat Manchester United 2-0 in the first leg of their Round of 16 match only to lose 3-1 at home while United advanced. Ajax shocked Real Madrid with a 4-1 win in the second game back in the Round of 16 to advance.

Crazy things have happened this Champions League season so don’t give up hope yet, Liverpool fans, they just need to find a way to shut down Lionel Messi, one of the greatest players in the history of the game.