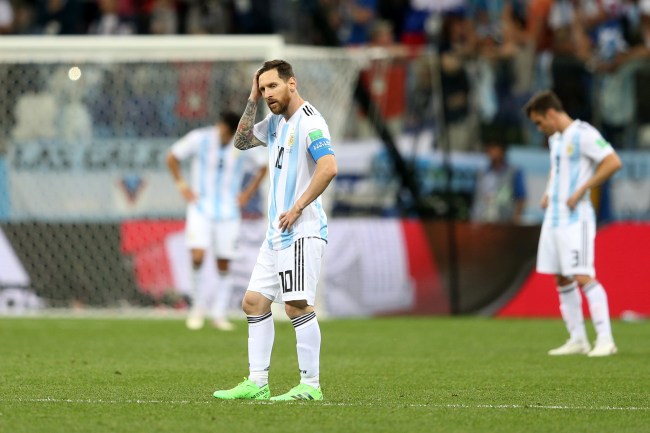 Lionel Messi and Argentina are on the brink of World Cup elimination after getting systematically dismantled by a hungrier Croatian team, 3-0. Messi, who is arguably the best player on the planet, stained his World Cup legacy by appearing wholly disengaged in his team’s drubbing. For perspective, Messi has started a combined 42 games for club and country since the start of the 2017-2018 season and has only twice registered just one shot or fewer. To add insult to injury, Messi’s nemesis, Cristiano Ronaldo, currently leads the World Cup with four goals in two wins for Portugal.

In Messi’s defense, a mind-boggling error from Argentina goalkeeper Willy Caballero broke a 0-0 tie in the 52nd minute, and Croatia wouldn’t look back.

What was Caballero thinking? His howler has gifted Croatia the lead. Wow, not a good look. #ARG #CRO pic.twitter.com/AaYaPGiOeH

Argentina, who looks to have the chemistry of a bad first Tinder date, will need a lot of help to escape Group D. It’s safe to say that Twitter has already dig Argentina’s grave.

The anti-Messi clan in full swing. One of the realities of an extremely successful career is that any failings or shortcomings are amplified to high heavens.

Did Lionel Messi play in that game? I thought leaders stood up when they’re needed. What a dysfunctional team. Dreadful.

Messi when he plays for Argentina: pic.twitter.com/cFzoWmkDSZ

The Messi vs Ronaldo debate ended tonight. Messi is a fantastic talent but his total lack of interest and desire in his national shirt displays a weakness of character that Ronaldo would never show

Have you seen Lionel Messi? pic.twitter.com/EwebpIOzrz

Messi needs to score 9 goals against Nigeria on Tuesday to right this wrong.