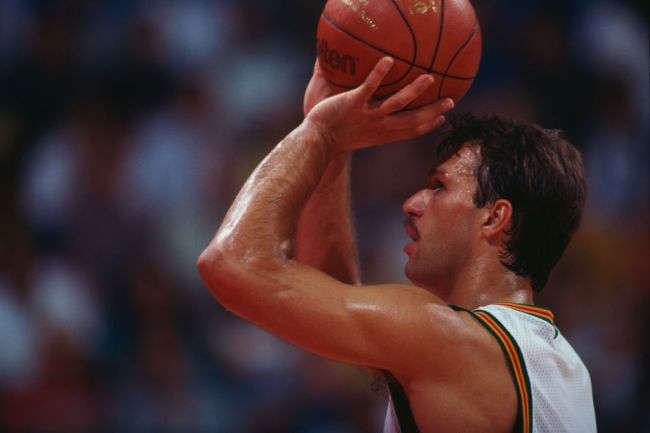 In 1991, the Grateful Dead came through in the clutch, and it made for a really awesome story. Lithuania’s national basketball team was a talented squad who needed financial help to compete in the 1992 Olympics after the fall of the Soviet Union. Jerry Garcia, Bob Weir, Phil Lesh, Bill Kreutzmann, Mikey Hart, and Vince Welnick decided to help them out.

Lithuania had a proud basketball tradition in the early 1900s and the small Baltic state actually won the European Basketball Championship twice, in 1937 and 1939. However, toward the end of WWII, Russia absorbed the tiny nation of three million people in to USSR. Basketball remained the country’s most popular sport, but Lithuanians were now playing for the Soviet Union, instead of their own country.

Members of Lithuania were a prominent part of Moscow’s bronze, silver and gold medal winning teams at every Olympics from 1952 to 1988, execept 1984. At the 1988 Games, the Soviet Union beat the United States in the semifinals and then beat Yugoslavia for gold.

Two years prior, in 1988, the Atlanta Hawks and Portland Trail Blazers both tried to draft the 7-foot-3 Lithuanian center Arydas Sabonis, who played on the gold medal team that took down the Americans. Officials behind the iron curtain in the USSR would not let him go. After the Games, the Golden State Warriors were successful in picking up Sabonis’ teammate, Sarunas Marciulionis. Sabonis eventually joined the NBA in 1995.

The point is that the 1992 Lithuanian team had some legitimate players after the Soviet hammer and sickle flag was lowered for the last time on Christmas Day in 1991. Even though the team was talented, the nation had been independent for less than 10 months when the Olympics were scheduled to begin, and it did not have any money to support a national basketball team. Players were desperate to make the trip to Barcelona, and Marciulionis’ Golden State coach wanted to help.

Donnie Nelson, who spent a few years in the USSR scouting the two NBA talents, started a grass-roots fundraiser in the San Francisco Bay area. It wasn’t gaining much traction until a local sports writer, George Shirk, wrote a piece about the situation in the San Francisco Chronicle. Grateful Dead public relations manager Dennis McNally caught wind of the article and showed it to the band.

The Dead, who are all about freedom and celebration, took immediate action. They not only cut a large check, but they had their designer send over Grateful Dead-inspired warmups. On the shirts, a skeleton was dunking a basketball. They’re awesome.

After the team arrived in Barcelona, emotions ran high, as Lithuania was playing for its own flag for the first time in more than 50 years. Their talented front-court/back-court duo couldn’t stop balling, and the newly-independent nation played itself into the semifinals with a 114-96 win over Brazil in the quarterfinals. They ran into the United States “Dream Team” in the next round and were defeated 127-96 by Michael Jordan, Larry Bird, Patrick Ewing, David Robinson, Christian Laettner, John Stockton, Scottie Pippen, Clyde Drexler, Karl Malone, Chris Mullin, Charles Barkley and Magic Johnson.

The loss ended up being a gift. As the U.S. went on to win the gold medal game, Lithuania faced their former Soviet Union counterparts in the third place game— the Unified Team, made up of all the post-Soviet states except Estonia and Latvia. The Baltic nation prevailed over their former overlords, winning the bronze medal 82-78. Prior to the medal ceremony, a “proper sponsor” offered to pay for all new uniforms, but Lithuania declined and stuck with the Grateful Dead.

Lithuania won bronze again in 1996 and 2000, Sabonis played seven seasons in the NBA and was inducted into the Hall of Fame in 2011, and Marciulionis joined him in 2014. One of the coolest stories in sports would not have happened without the greatest jam band of all-time. It just goes to show, “without love in the dream it will never come true.” Lithuania’s dream had love for the game and it came true.