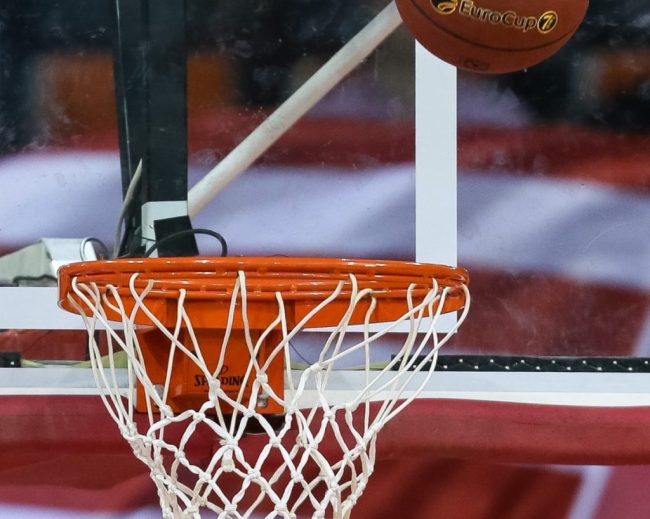 We may be gearing up for the NBA Finals here in the US, but overseas, it seems they’re taking their basketball a bit more seriously.

A wild scene broke out in a Lithuanian basketball league finals series this week that saw a head coach nearly get into fights with both the opposing coach and owner as he stormed off the court.

The league is the Betsafe LKL. The coach is Lietkabelis’s Nenad Canak. The story is unbelievable.

Lietkabelis is taking on Rytas in the championship series. With the two teams knotted at a win apiece, the foes entered Game 3 with a chance to take a one-game advantage.

It was all Rytas from the start, with the squad taking a commanding 51-25 lead as the first half closed. That’s when head coach Nenad Canak went absolutely bonkers.

Canak lost his mind, yelling across the floor in the general direction of the opposing team. He then stormed off the court, pushing opposing head coach Giedrius Zibenas down as he passed by. But that wasn’t the end of the crazy scene.

The incident then trickled into the stands as the Rytas owner rushed down the bleachers to give Canak a piece of his mind. The two had a shouting match, nearly coming to blows, before officials were able to separate the two sides and escort Canak to the locker room.

What is happening in the Lithuanian basketball league final 🤯

Lietkabelis head coach Nenad Canak just pushed Rytas HC Giedrius Zibenas. Then he got into a clash with the owner of Vilnius club 😱

What’s wild is that Canak then denied pushing his opponent, not taking any responsibility for his part in the altercation. No apology. Nothing.

After the unprecedented events in the Lithuanian basketball league final, Nenad Canak stated that he DID NOT push Giedrius Zibenas 🙅‍♂️ pic.twitter.com/FdqgyUi6RA

“I am not an actor, I am not a flopper, I am just a straight guy and, obviously, I act how I feel. I did not push him. I just walked my way.”

While there might have been an over exaggeration on the reaction, it’s clear that Canak went out of his way to make contact with the opposing coach.

The Rytas coach responded to the comment, and he obviously thinks Canak is in the wrong. Game 4 is up next on Saturday. We’ll see if emotions are still running high from this crazy scene.