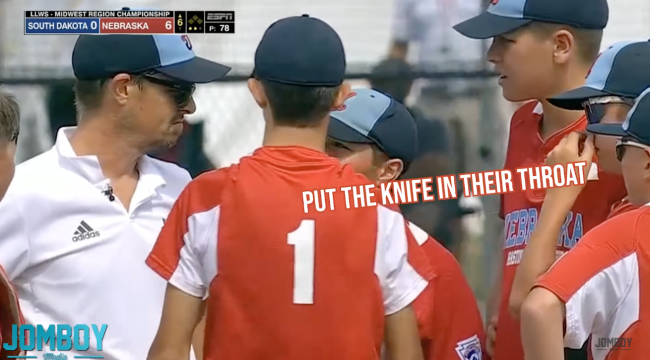 Summer hasn’t officially started until we have Little League coaches taking a trip to the mound and giving sappy speeches to their players in hopes to go viral. It’s a safe bet that this particular moment between Nebraska’s head coach won’t be making the rounds on SportsCenter.

With his team leading 6-0 and only needing one more out to win the Midwest Region, Nebraska’s coach realized it was now or never to insert himself into the storyline and deliver a soundbite that would be played throughout the Little League World Series.

He gathered his team on the mound and began his sappy speech the players could not care less about by saying “This is the most important thing I’ve had to say since we’ve been here. I don’t say it enough and I want you guys to hear it.”

As he finished his sentence, one player blurted out “put the knife in their throat.” Somehow, ESPN didn’t dump the incredible exchange and it now lives forever on the internet.

The coach still continuing with his ‘I love you’ speech is all sorts of cringe. You know he’s fishing for a viral moment when he literally says ‘No matter what happens, I love you,’ as if there’s a chance his team is about to give up seven runs needed just one out to punch its ticket to the LLWS.

So, if you see this soundbite throughout the course of the LLWS with Nebraska’s coach telling his team he loves them, just know that one of his players was the real star of the moment seconds before wanting to stab the other team with a knife.

Nebraska got the final out it needed after a bit of drama with their left fielder hurting his arm and not having the ability to throw.