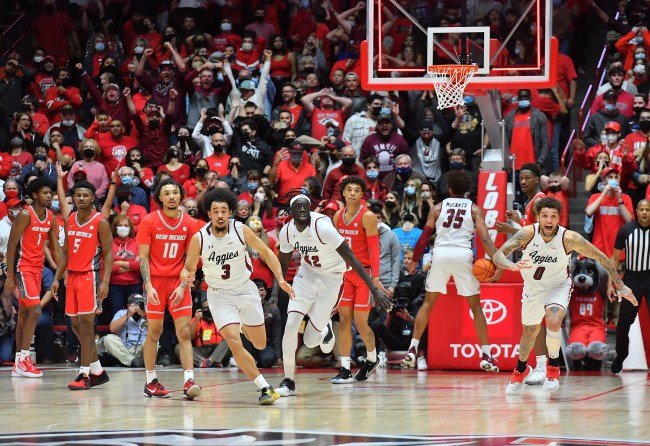 Rivalries in sports can sometimes bring out the worst in fans. Those fans will yell nasty things at opponents. They’ll wish for major injuries to players they don’t like. Sometimes they throw ice at their opponents (yeah, I’m looking at you, Lobo fans).

Then there’s this fan who just gets what sports rivalries should be. He didn’t feel the need to wish death or injury on anybody. He didn’t call for violence. All he asked for was violent diarrhea.

Aggies are trash!!! I hope they all eat bad posole and get the shits in the middle of nowhere on the way home 😂😂😂#NMSUcks #GoLobos🐺🏀

Not only is this a perfect response to your favorite team losing on a last second shot to their in-state rival, but it is the most New Mexico response you could have to anything.

There’s a special kind of terror that you feel when you’re somewhere between Albuquerque and Las Cruces, nowhere near civilization, and you suddenly realize your digestive system is not responding well to the tons of red chile you ate for dinner.

That fear is all too relatable for a state that considers one convenience store chain’s burritos a delicacy. In fact, it wouldn’t be the least bit surprising if the Aggies grabbed some burritos while the team bus was getting gas and this fan actually got his wish.

This fan’s tweet stems from some animosity after New Mexico and New Mexico State’s most recent Rio Grande Rivalry matchups. First, the Lobos won a high scoring matchup in Las Cruces last week to hand the Aggies their 2nd loss of the year. The Lobos reportedly got a bit carried away with their celebration.

Last night, New Mexico State returned the favor, winning by two in overtime after they got a miraculous buzzer beater to drop. The Aggies then went to center court and stomped and spit on the New Mexico Lobo logo.

Fans couldn’t have asked for much more out of this rivalry’s return after missing out on the matchup last season.