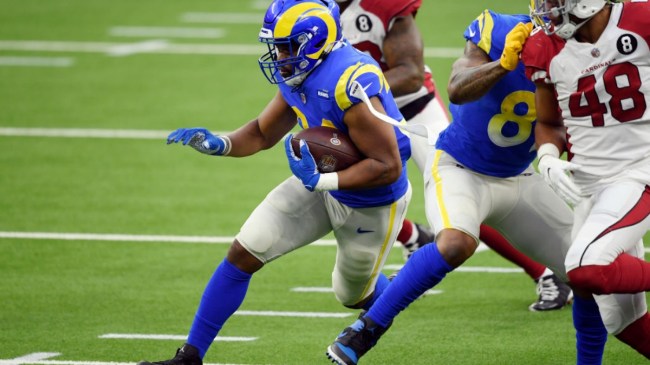 Anybody who drafted Cam Akers for their fantasy football team this season is having a pretty rough start to the year. The 3rd-year running back came with a 3rd or 4th round price tag for most fantasy drafters, but hasn’t come close to paying that off so far.

Fans were stunned in Week 1 when Darrell Henderson worked as the Los Angeles Rams’ starting running back while Akers only took 3 carries and didn’t gain a yard. After the opener, it became clear that Akers was already in Sean McVay’s doghouse.

Week 2 was better for both Akers and those relying on him for fantasy points. He received 15 rushing attempts in the game and a pair of receptions on 3 targets. Unfortunately, he was still working behind Henderson and he only picked up 44 yards on those 15 carries, good for a meager 2.9 yards per carry.

Now it seems the Rams may have brought in some more competition at running back. Today they announced that they were signing Malcolm Brown to their practice squad.

Brown was drafted by the Rams back in 2015 and was a part of their rushing attack until 2020. As a member of the Rams, Browns posted 1188 yards and 11 touchdowns over the course of his 6 seasons with the team.

Since thence has appeared in 7 games for the Miami Dolphins and was briefly a member of the Saints during the preseason.

Now he returns to the Rams in a move that seems to indicate the Rams wanted some more options at running back.

If Brown can carve out any kind of a role with the Rams, it will be bad news for Cam Akers owners who can’t really afford to see him losing any more snaps.