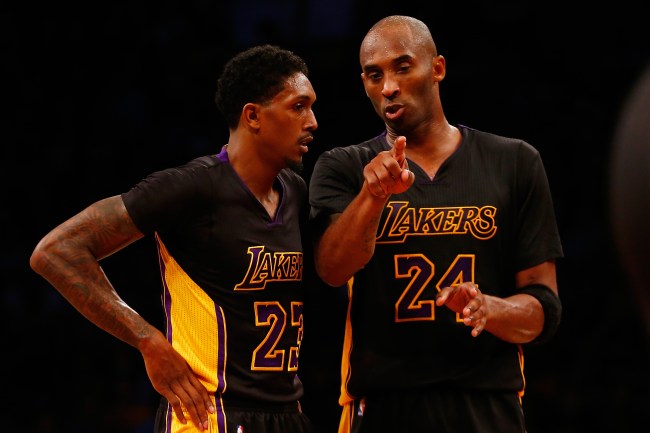 During his playing years Kobe Bryant was one of the league’s fiercest competitors and he made sure the team brought it every night even when the Lakers weren’t very good.

After Kobe tragically passed on Sunday afternoon, Nick Young and Lou Williams took to Twitter to share stories about what it was like to be Kobe’s teammate.

Love you man …I can’t believe this and didn’t wanna believe it ……I woke up hoping this was all a bad dream … to many fun and great memories man this hurts .. happy I got a chance to call my favorite player… https://t.co/AuD1pbdQUG

I just seen you man and you was talking about the broke thumb story lol crazy ass didn’t believe me but I tell everybody you was the first person to check up on me before surgery and after. I told him imma tell the story of him throwing my shoes in the trash next and he laughed

During the conversation, Williams shared a funny story on how Kobe wouldn’t allow Lakers players to wear Kobe sneakers after the team got blown out in Portland.

We got blew out in Portland. He took everybody Kobe’s and said they couldn’t wear it cause we was soft 😂😂

Williams has shared several stories in the past about Kobe’s competitive spirit.

I was cracking up when you told this story Lou. 💔 pic.twitter.com/RGBSqlazyU

All these Kobe stories are great.