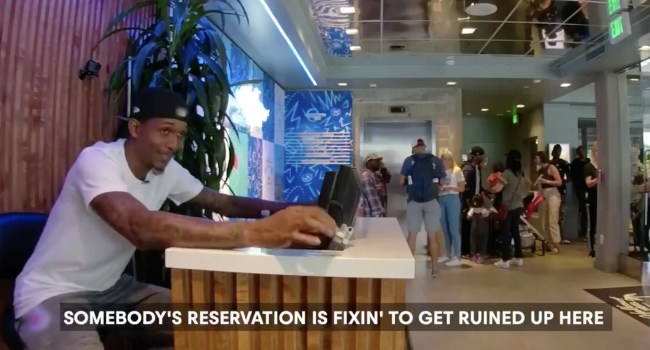 Over the weekend, Red Bull took over Hotel Erwin in Venice Beach for the Halfcourt Hotel, a hoops-themed hotel just a block away from the famed Venice Beach Courts. Red Bull recently announced a multiyear partnership with USA Basketball, all with the goal of growing 3X3 basketball. Legendary Dream Team member Chris Mullin posted up for a weekend that included dunk contents, as well as 3×3 games and parties at the beachside Hotel Erwin.

LA Clippers sixth man Lou Williams was hanging around for the festivities. Williams even got behind hotel desk, acting as a front desk manager to check people in. Even though he’s called Los Angeles home in a Lakers and, now, Clippers uniform, an absolutely astounding number of people didn’t recognize him.

So he had fun with it, giving a lady a fake password for room access and telling her the secret phrase is, “Dewey sent ya.”

The best part: When one guest does realize it was Lou Williams, he asked for a follow on Instagram. Lou’s response is classic:

Check out the video here:

But serious, I wish I could live in the penthouse suite:

NBA Jam and a fridge full of Red Bull. pic.twitter.com/3V8xro2dvc