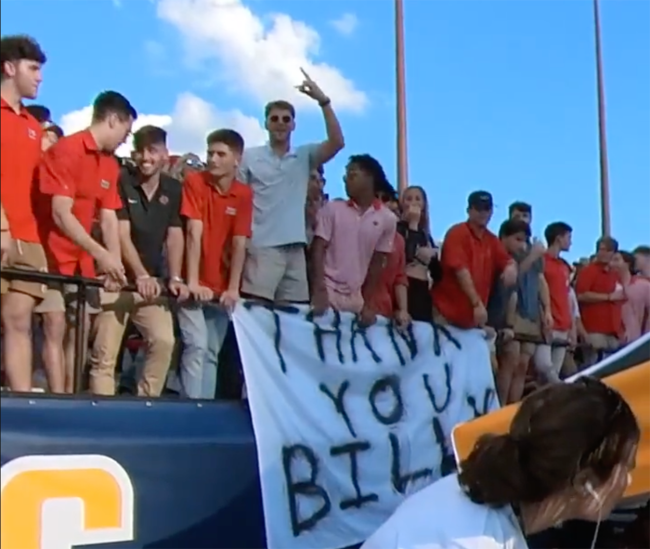 Cajun Field in Lafayette, Louisiana aims to provide the best home-field advantage as possible, but things got ugly during Saturday’s Sun Belt Championship. ULL fans were spitting on Appalachian State players and staff.

The Ragin’ Cajuns student section is located directly behind the opposing bench. There is maybe 10 feet of space between the players on the sideline and the closest fan.

Here’s the room between where our players sit and the opposing fans pic.twitter.com/pKS6EgW0DS

And, based on an ESPN cutaway, at least some of those fans were intoxicated. They were literally slapping the bag in the stands, which is great, until the behavior becomes problematic, which is exactly what happened on Saturday.

Per Mountaineers videographer and content creator Max Renfro (if you haven’t checked out his stuff, do so), the students were acting recklessly. He alleges that multiple Louisiana fans spit on Appalachian State players and staff. He also provided video evidence that it happened at least twice.

Here’s how we are being treated in Louisiana. Watch the guy in the striped shirt spit twice. When he saw I had a video of it he ran away. I have seen multiple people spit on our players and support staff. Thanks for the hospitality @SunBelt @RaginCajunsFB pic.twitter.com/0S49113W8N

Louisiana ended up winning the game, and thus, the conference. However, its head coach Billy Napier is headed to Florida, so the program will be in transition over the next few years.

Regardless of how the Ragin’ Cajuns move forward, it will need to address its fans for their behavior on Saturday. Heckling is good, and truthfully, the obscenities and hand gestures are going to happen. They aren’t a great look, but it’s something that can be looked past.

Spitting, on the other hand, is simply unacceptable. Not cool, Cajuns.