Ragin’ Cajuns Fan Gets Caught ‘Slapping The Bag’ In The Stands, ESPN Quickly Cuts Away (Video) 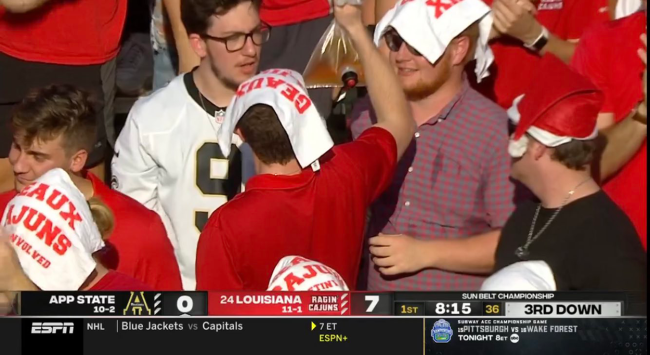 The Cajuns are most certainly Ragin’. As No. 24 Louisiana-Lafayette tried to win its first Sun Belt Championship in four consecutive appearances, its fans were getting rowdy in the stands.

The Ragin’ Cajuns, who have reached the championship game out of the West division every year since 2018, lost to Appalachian State in back-to-back years and had last year’s game cancelled due to COVID-19.

Because of recent history, this year’s game is an even bigger deal than it usually — especially after head coach Billy Napier accepted the head coaching job at Florida. And to help with fan attendance, ULL hosted the game, so the Cajuns didn’t have to go far.

However, there are very specific rules at Cajun field. No outside food or beverage is permitted, and only clear bags that are smaller than 12″W by 12″L by 6″H are allowed in.

Thus, fans are forced to get creative. Particularly the students.

Typically, the best way to get booze into the stadium is by putting a flask or some shooters in your boot or in the groin of your pants. It’s rarely more than a few shots.

That was not the case for a group of Cajun fans. They, somehow, managed to get in an entire bag of booze.

Early in the first half, ESPN cameras cut to the student section. One of the students, wearing a red shirt and a towel over his head, turned to his friends and offered them a drink of what is likely Fireball.

ESPN was QUICK to cut away.