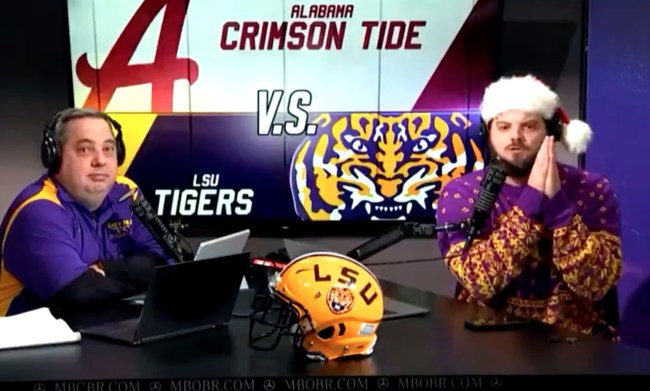 Alabama beat LSU 55-17 this past weekend which is a result every single Alabama fan and college football fan in general expected. This was a revenge game for the Crimson Tide after LSU went to Tuscaloosa a year ago and beat Bama to essentially punch its ticket to the SEC Championship game.

LSU is a shell of what it was a year ago while Alabama is, well, Alabama.

Alabama is 161-23 since Nick Saban took over the program in 2007 and the Tide have lost a total of six games over the last six seasons. There’s no denying that fans of other college football teams are jealous of Alabama. After all, winning is much more fun than losing.

ESPN Baton Rouge radio host T-Bob Hebert took calls during his show on Sunday following LSU’s blowout loss to Bama. An Alabama fan called into the show to rub in the loss and Hebert went off on one of the greatest tangents in radio history describing Alabama fandom.

Hebert put things into great perspective comparing Alabama to the USSR where they have a single expectation and they have nothing to hope for. Having multiple expectations, hope, and experiencing ups and downs are what makes being a die-hard college football fan so incredible and Hebert’s poetic masterpiece torching Alabama puts that into perspective.

LSU is Greece, sometimes it’s beauty, art, and passion, at other times it’s economic collapse & rioting in the streets

Bama is the emotionless void, there is no happiness, there is only the expectation pic.twitter.com/xWgqvQnbO3

Hebert makes so many great points during the segment, but one that I think so many college football fans can relate to is when he describes how incredibly special it was when LSU knocked off Alabama a year ago which he experienced with all his friends and family.

Dreading a loss instead of hoping for a win seems exhaustingly boring, but that’s pretty much the life of a Bama fan.