Louisville Coach Scott Satterfield Suffers Word Vomit, Says Players Must Be ‘All In’ While Coaches Must Think Of Their Families 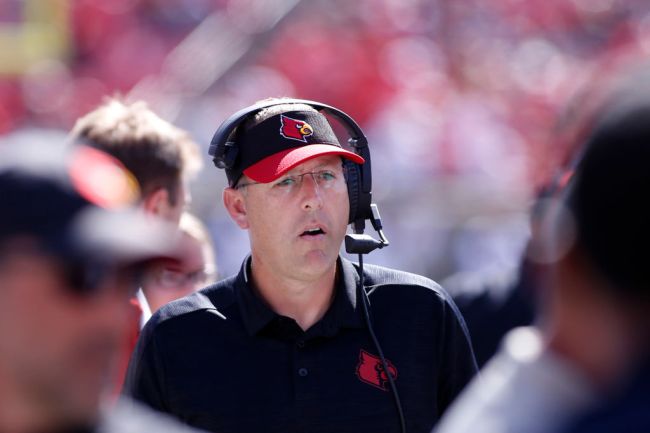 Things have not gone well for Scott Satterfield and the Louisville Cardinals this season, particularly over the last week or so. Not only is Louisville one of the bigger disappointes in all of college football sitting at 3-7 on the year, but the second-year head coach recently caught diarrhea of the mouth just a few days after saying he interviewed for the South Carolina job.

During a press conference on Monday, Satterfield was asked what the difference was between a player’s commitment to a program and a coach’s commitment to a program. Let’s just say he didn’t hold back from completely downgrading the players on the roster while essentially telling Louisville he doesn’t have concrete plans of sticking around for too long.

“As players, it’s a little bit different than coaches,” Satterfield said. “Sometimes we like to lump coaches in with players. As a player, you’re there for three to four years and then you’re done. As players, you don’t have a family. It’s just you. As coaches … and I’m just thinking in general terms here … coaches have wives and kids. As a job, are they going to be a job at 40 years? There are a lot of different things that are involved in coaching. With players, like I said, it’s three to four years, and they have to be all in.”

You have to respect any head coach that will speak his mind and be honest with the media, but he’s got to use better phrasing than that. The only thing Satterfield could’ve said that was worse was literally ‘I don’t care about my players and I want to get the hell out of this place.’

Those players that ‘have to be all in’ have families too and some have wives and children of their own, but Satterfield clearly isn’t too worried about them, only the next step in his career.

Satterfield did walk back his comments a bit explaining what ‘all in’ means to him.

“It’s hard as a player to go to class, get up and go to meetings, go to weight training, to go practice, come back and study, and then, oh by the way, go perform on a game day. There are a lot of things that a player has to do and so many different avenues that are pulling at them. So you have to be all in.”

Louisville fans surely can’t be happy with Satterfield at the moment as the Cardinals are a bad football team and he openly came out and told the Courier-Journal he had interviewed for the vacant South Carolina job.

He could’ve kept the interview a secret, but you can’t blame him for trying to land a better job while his current team is 3-7 on the season.

South Carolina officially announced that it had hired Shane Beamer earlier in the week.