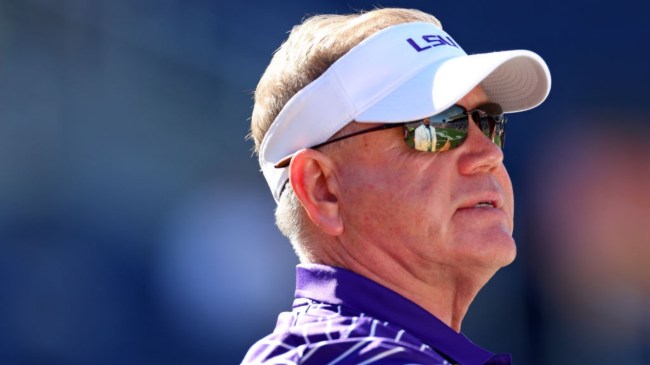 Things went pretty well for the LSU football program this past season.

After going 6-6 during the regular season in 2021, the Tigers fired head coach Ed Oregon.

To replace him, they brought in Notre Dame head coach Brian Kelly with a hefty contract offer.

The move seemed to have the desired results.

After that disappointing 2021 season, LSU quickly turned things around in 2022.

After a couple of bumps in the road during the first half of the season, Kelly got the Tigers’ offense on track in the second half of the year and led the team to a pair of wins over top 10 opponents.

He also helped the program secure the SEC West title over Alabama.

It didn’t take long for Kelly to prove that he was worth all of the money being sent his way by LSU, but it turns out he was a bit more expensive than expected during his first season in Baton Rouge.

A Louisiana Legislative Auditor found that the program actually paid Kelly over $1 million more than was expected because of double payments to Kelly and his LLC.

Louisiana Legislative Auditor found LSU overpaid Brian Kelly by $1M+ in 2022 due to erroneous double-payments to both the coach and Kelly’s LLC—the school enacted an adjusted pay schedule to recoup the funds by the end of FY2023: https://t.co/2ljZtoMrPk

According to the report, the school has put together an adjusted pay schedule for the 2023 schedule to recoup the funds by the end of the fiscal year.

That’s a pretty huge mistake for the university to make, but you could argue that Kelly earned that extra million.

The same report revealed that profits went up by 15% for the LSU football program in 2022 and Kelly already has the Tigers contending in the SEC again.

Maybe the accounting department was just really excited about the future may hold for LSU with Kelly as the head coach.