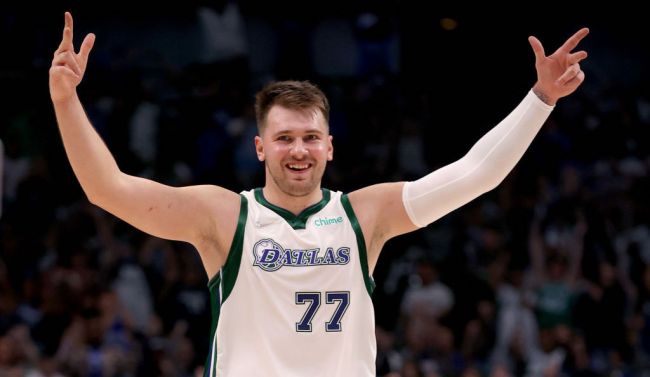 They say non-verbal cues are 90% of communication — that’s literally the one thing I remember learning in college, sorry Rutgers. So, if body language is a sign of future performance then the Golden State Warriors could be in for a difficult couple of weeks of Western Conference finals action as rising superstar Luka Doncic was spotted on Tuesday (at least according to the person who posted the photo on Reddit) having a beer with Boban, looking like he was without a care in the world.

Now, to be clear, the 23-year-old Doncic would still strike fear into Warriors fans’ hearts regardless, as the Dallas Mavericks forward averaged 32 points, 10 rebounds, and 7 assists per game against the Phoenix Suns, the Western Conference’s #1 seed who possessed the league’s best regular-season record, in the previous series.

Still, the sight of Luka and his Slavic sidekick Boban Marjanovic being absolute bros and crushing brews in the sunshine seems to be adding an extra sense of impending doom for Warriors fans, who will be hosting the Mavs on Wednesday and Friday night before the series shifts to Dallas.

Whoever said beer is bad for you is a liar https://t.co/zdt843e9Vr

i’ve seen comments and i love how fans think players are supposed to be cooped up in their hotel, watching film or in the gym shooting jump shots—off days are exactly that https://t.co/5eMZBq68Bn

Drinking beer bout to drop 50 on the dubs https://t.co/Ut2fMj34fe

"Still drop 40 with liquor in my system" https://t.co/yF0Updo3pB

no doubts in my mind hes boutta go tf off tonight https://t.co/BQfev8Hx8R

Drinking a beer in SF before dropping a 40 point Triple Double and a Dub against Dub Nation #Goat https://t.co/hoVQQxMt6o

Despite the other-worldly talents of Doncic, the Mavericks are the underdogs (+180) heading into the series against the veteran Golden State Warriors, who find themselves as favorites with odds of -215 to advance to the 2022 NBA Finals.

RELATED: Lil Wayne Gets Mocked For Sitting Courtside To Watch Suns Lose Days After He Took A Shot At Luka Doncic