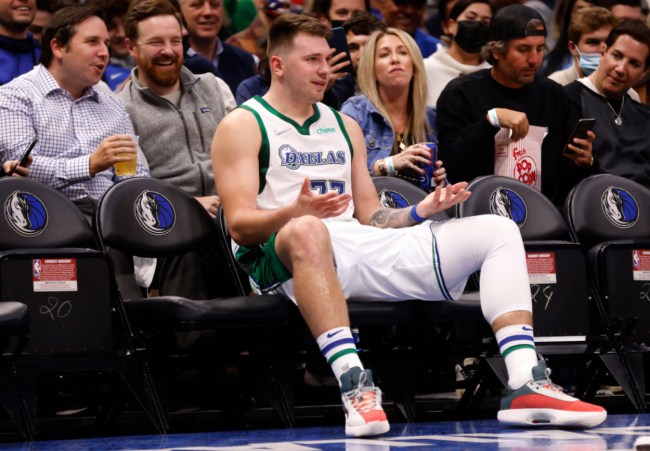 New Orleans Pelicans forward Zion Williamson has been on the receiving end of some pretty tough criticisms about his weight this season while still sidelined after offseason surgery.

Williamson has heard the criticism about his weight for his entire NBA career, but now some around the league have shifted their weight-focus onto a new target, Dallas Mavericks guard Luka Doncic.

Following the Mavericks’ loss against the Brooklyn Nets on Tuesday, in which Dallas blew a 17-point lead, Doncic’s weight and conditioning came up during his postgame press conference. He was quick to point out that he may have relaxed a bit too much this summer.

“I had a long summer,” Doncic explained. ” I had the Olympics, took three weeks off, and I relaxed a little bit. Maybe too much. I’ve just got to get back on track.”

Doncic reported to Mavericks training camp weighing in around 260 pounds, which is 30 pounds above his listed playing weight of 230 pounds, according to ESPN. The NBA still has him listed at 230 pounds.

Reggie Miller, who was on the call for the Nets-Mavs game on Tuesday night, pointed out that Doncic looked heavy on the court.

“This is the heaviest I’ve probably ever seen Luka look, right now,” Miller said. “I know he’s had a long year with the Olympics, but look how he’s plodding up and down. He’s not really running.”

Luka Doncic addressed the ongoing talk about his weight and conditioning with reporters after the Mavs loss to the Nets saying:

“I had a long summer. I had the Olympics, took three weeks off, relaxed a little bit. Maybe too much. I’ve just got to get back on track.” #MFFL pic.twitter.com/1K9BsYvL3e

Some may read Miller’s quotes and say he’s ‘fat-shaming,’ but at the end of the day, Doncic is a professional athlete that makes millions of dollars to be in great shape and be one of the faces of the NBA. Doncic is in the entertainment business, and if he can’t entertain the best he can due to his weight, well, that’s a problem.

On the flip side of that, Doncic is still entertaining at a pretty unbelievable level.

On Tuesday night he dropped 28 points, nine assists, and snagged six rebounds. He’s only played in 19 games this season, but he’s been stellar over that stretch averaging 25.5 points, 8.5 assists, and 7.9 rebounds.

Doncic may be heavier, but he’s still averaging close to a triple-double. Other teams around the league should probably hope he doesn’t get into great shape, because when that happens, look out world.