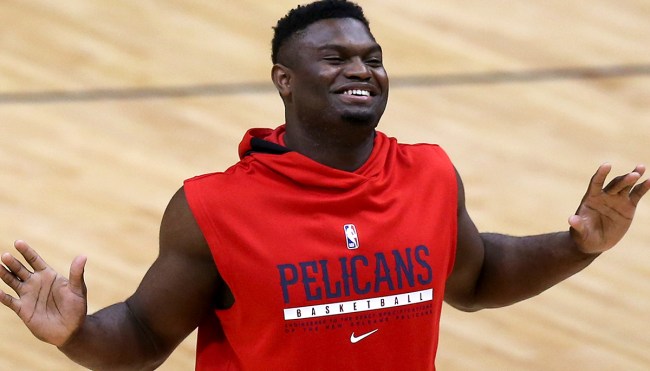 Zion Williamson was touted as a potential generational superstar during his brief but dominant stint at Duke, but the power forward has largely failed to live up to expectations since taking his talents to New Orleans thanks in no small part to the injuries he’s had to grapple with after making the jump to the NBA.

Now, it’s not exactly a secret that Williamson has struggled to keep his weight under control since joining the Pelicans. While you’re free to jump into my mentions to accuse me of fat-shaming, I’d ask you to do the same to Charles Barkley, Shaquille O’Neal, JJ Reddick, and the many other former NBA players who’ve voiced their concern over his inability to stay in playing shape.

A noticeably hefty Williamson turned plenty of heads when he made his debut earlier this season, and last month, a report claimed the Pelicans revamped their in-house culinary program in an attempt to help him lose some pounds that certainly aren’t doing the foot injury he’s been nursing any favors.

Unfortunately, it doesn’t appear it’s made much of a dent based on a picture that was taken by reporter Steve Helwick when New Orleans faced off against the Rockets in Houston on Sunday.

Helwick opted to delete the tweet he sent out before the picture went viral due to the criticism Williamson was subjected to as a result, and he made a valid point when he noted he’s still a 21-year-old who’s got plenty of issues to deal with already.

I deleted the Zion Williamson tweet. Too many nasty comments, quote tweets, and by it staying up, I was contributing to the problem. Couldn't bear it anymore.

At the end of the day he's only 21 years old. Wish him the best as he returns from his foot injury. Bright career ahead.

With that said, when you consider he’s getting paid $10 million a year to play basketball, it’s easy to understand why Pelicans fans (and members of the organization) are less than thrilled with his current status.

Here’s to hoping he’s able to bounce back.